I'm having trouble understanding why with this script, Vector3.Angle() sometimes will never reach 0.

This question comes from me trying to make a "turret" that rotates to face a target position. It was not quite working (the angle between the turret and target would get very close to 0 and start flipping between + and - values, and never actually 0).

So to debug it I stripped the script down, and used transform.LookAt(), trying to isolate the problem. However, even using LookAt(), the Vector3.Angle() method still -sometimes- refuses to report the angle as 0, and I'm not sure why.

The attached image should also help demonstrate what is going on (note that the object doing the checking is an empty GameObject located roughly where the orange square is).

Any ideas as to what I'm doing wrong are appreciated, thank you for reading. 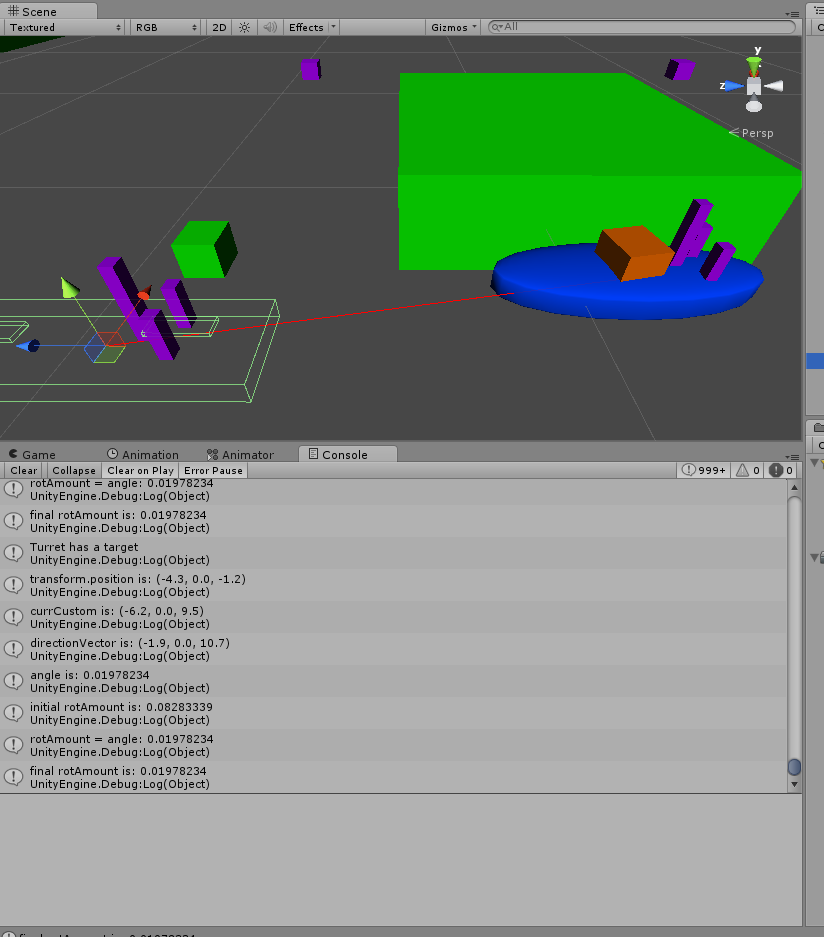 I think it depends on floating point math errors, I suggest to define a min angle (mindelta in my code example) inside wich, the turret doesn't move

Does normalizing the vectors make a difference?

@Jon: Good catch, normalizing "directionVector" seems to make the math work out (transform.forward is already normalized). So if you make this an answer I'll mark it as correct. If possible, could you elaborate on how normalizing the vector makes the math work out? I'm familiar with the concept of normalization, but I just don't fully understand the mathematical significance in this case. Either way, thanks again.

Borrowed from this question:

When p1 and p2 are both unit vectors, this condenses to:

Since p2 was not normalized, the angle coming out of acos() was being arbitrarily scaled by a factor of (1 / distanceBetweenObjects).

It's worth noting that the length of a 2X-scale world matrix's forward vector is 2.0. To find the angles between world objects, you'll definitely need to normalize.

Edit:
Although you aren't really close to it, I'd also mention a constant float value called Epsilon. It represents the smallest value that can be precisely represented by the float equation and anything that evaluates to less than that is usually considered "0 enough".

Not the answer you're looking for? Browse other questions tagged c# unity rotation vector angles .

3
Getting correct angles between Vector3s

1
Unity Vector3.Angle() direction
26
How can I rotate an object based on another's offset to it?
1
I found out how to rotate both Sphere and Cube (1) like a Turret facing a target but why is it so hard?
3
How to completely stop the camera from clipping into the ground
0
IndexOutOfRangeException on array of transform prefabs in Unity
0
Applying Y offset to rotation / position script
0
How do I rotate a gameobject towards a point in world space?
0
How can I check if the player is moving or not?
0
Why the transform is not rotating back smooth to his original starting rotation using lerp?