How can I achieve a pseudo-3D camera effect like this?

I am trying to achieve a pseudo-3D camera effect similar to this:

I have gotten the following results using a 3D camera and billboards:

I am now running into the following problems:

In the first billboard example I setup my camera like so:

My sprites are positioned at the following locations:

If you want the grid: http://pastebin.com/R5UCBNWt

You can do this in two ways, both of which require 3D cameras and projection:

First, give all of your objects a 3D position in the world.

Next, create a camera with a position and orientation:

Now, the two ways of drawing.

You're probably familiar with SpriteBatch already. It's a way of drawing sprites to the screen in screen space. One thing you can do is simply project all of your objects onto the screen, scale them by their distance to the camera, and then render them. This is a hacky way of doing things, because you have to fake perspective and the depth buffer.

Here's how to do it:

You can also just create for each sprite a physical 3D model, just a 3D billboard, oriented to face the camera. Then, you can render it like any other XNA 3D geometry. The depth buffer will work flawlessly, you won't have to guess the scale, and perspective will be taken care of correctly. I suggest this tutorial to get you started.

I would agree that it would be best to go fully 3D billboard with this. You can do this without shaders (well, you would use the built in BasicEffect which is an already written shader for you). 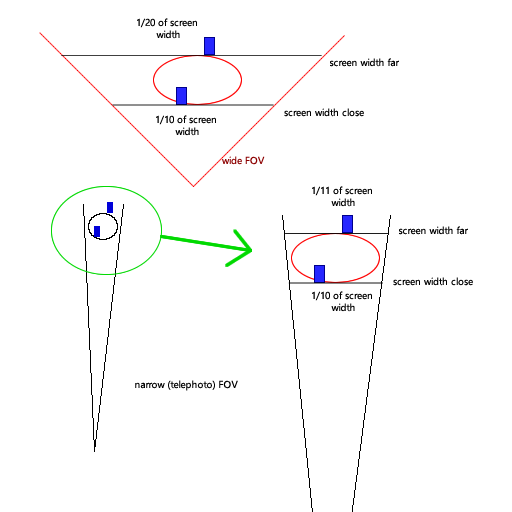 When you move the camera close to the scene and widen the FOV, the close fighter (blue square) is taking up approx. 1/10 of the screen, but the farther fighter is only 1/15 to 1/20 of the screen which is drawn as a much smaller object. When moving back from the scene and narrowing the FOV, the close and far fighters appear about the same size with the farther one only slightly smaller instead of a lot smaller. Experiment to find the sweet spot.

Not the answer you're looking for? Browse other questions tagged xna 3d camera projection perspective or ask your own question.