Dot based light mask with shader on sprites

So I have a scene, completely based on 2D sprites. I want to render "light sources" into a seperate frame buffer (so mostly dots around, for example, the centre of a flame) and then render that frame buffer with my "lighting" shader above my whole scene, causing the light sources to "tint" the surrounding pixels, mostly by blending a pixel with the light source's color dependant on it's distance to the nearest light source.

The question: What concepts should I apply here to get the results I want? What am I doing wrong right now?

I have here a few concept drawings:

The scene without lighting:

The framebuffer of the scene containing the light source (the top yellow pixel of the flame):

The result of rendering the framebuffer as a texture with the glow shader. I also "simulated" a 2nd buffer with a smaller radius and a yellow light at the same position.

Alternatively, and closer to my first approach to the idea, imagine the whole framebuffer of the 2nd pixel transparent but the dot at the center.

What I wasn't able to mock up quickly was a gradient of the lighting, dimming it at the edges and having it brighter at the center.

The current idea needs to conform this fragment shader's layout:

I am planning on making the radius variable by passing it as another uniform element. With what I am doing there, I don't get the results I am looking for.

Though through experimenting I got this glow-shader, which I like, but the edges of the logo are still a bit too dark though (left the passed frame above the original, that is right):

You're doing it wrong - very inefficiently. Instead of rendering lightsources to your "lighting framebuffer", render the lighting contribution. That would be a soft disk centered at your light source instead of a single pixel. Example disk: 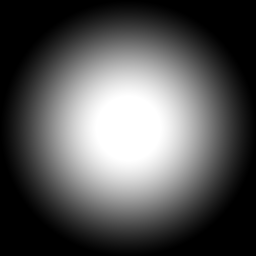 ... and you can render that as a sprite! (Additive blending, clamp to 1 for best results).

You can now bind that lighting framebuffer and just sample the texel location that you're interested in and you get the lighting contribution directly.

If you want to create the texture yourself, it's as easy as writing a shader like this: (run via shadertoy)

Not the answer you're looking for? Browse other questions tagged 2d shaders glsl lighting .

1
Light following me around the room. Something is wrong with my shader!
4
2D Software Lighting Issues in Java
3
Directional light shader not behaving as expected
0
fragment shader directional light positioning with camera
4
OpenGL light appears to move with camera and changes with object rotation
4
Stencil based mask with alpha
0
My point light shadows only really work if my point light is at the world origin (0,0,0)
4
Fine tuning light shader mechanics
0
Using Fragment Color to store individual bits (GLSL) may introduce issues if OpenGL does any evaluation of the floats before writing them to memory