I'm having a little trouble translating a point in my game's world space to an object's local space.

I have a cannon in my game with a normalized heading vector that's always supposed to point in the direction of a target. The target is set by an incoming screen touch event.

I hope my crude drawing conveys what I mean. In the picture below, A is the cannon's position (with the blue heading vector), and B is the target's location (set by an event). The green line represents the angle the game is giving me, and the angle between red line and the heading is what I need to find (the little curved blue arrow). 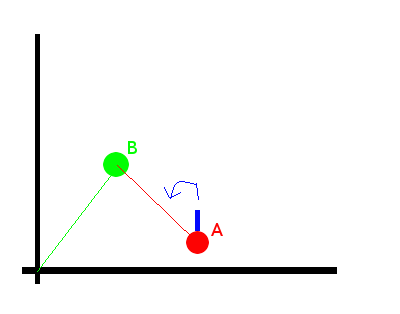 Here's the code I use to calculate the heading:

Thanks in advance. Any help is greatly appreciated.

This is fairly easily solved with a bit of vector math.

Or in other words:

From there on it's simply a matter of calculating the angle between the two vectors. I hope that is enough to get your code working

Not the answer you're looking for? Browse other questions tagged opengl java android matrix or ask your own question.

2
3D Translation using only distance and angles
7
How to implement a basic arcball camera in OpenGL with GLM
15
How to rotate an object around world aligned axes?
3
GLM/OpenGL: How Can I Prevent Vector Magnitude From Increasing While Rotating Bones in Skeletal Rig?
0
How can I implement a quaternion camera?
2
OpenGL Arc-Ball Camera Yaw Pitch GLM::Rotate
0
Wierd behaviour upon limiting rotation on Y-axis
4
Why is my model rotating opposite direction around the Y axis?
0
Cylindrical billboarding around an arbitrary axis in geometry shader