My thought on the matter was that you could use a shader with a cutoff value and an image which has one channel dedicated to masking the image (alpha) and one that also has a gradient which I compare to a uniform float to determine whether or not the fragment should be fully transparent.

However, I've been running into some strange behavior when writing this shader. Specifically, the shader's output has a weird artifact where the cutoff begins that looks almost like ripped paper -- the line that indicates the end of the meter has a sloppy contour. 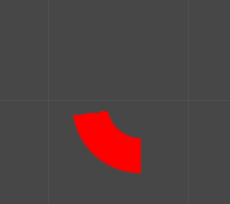 This image has some distortion effect going on with the pixels where the lifebar is supposed to end via the cutoff uniform. There's definitely got to be a better way of doing this same thing in a more tactful way. Shader code is below:

(Again, the red channel of this image is actually a gradient mask used to determine where the cutoff point should be. Other channels were going to be used for something else (like special scrolling patterns or what not) )

Example of the asset used in the shader:

I'm assuming there's probably something I'm missing when using the step function that could help ease the fade-dropoff in order to make a better looking end result?

What do you think is a good method for making curved meter GUI elements? Is there something wrong with the shader code presented above that causes this strange page tearing artifact?

There might be an option in your graphic tool or texture importer to disable dithering or compression.

Here is an example of what happens in Gimp with dithering enabled in the gradient tool. The small section of the gradient has been scaled up and levels boosted using the Colors->Levels... tool to clearly show the gradient dithering. 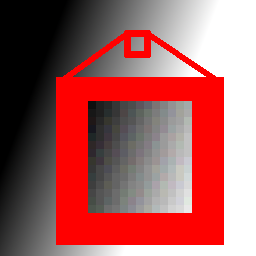 Another option is using smoothstep to add a small gradient to the cutoff point. That would help hiding those errors.

Tearing is caused by the nature of step function. It outputs 0 or 1, causing pixel either to be rendered or not. If you try it with smoothstep function you will get smeared edge instead.

You can fix tearing artifact by rendering a line on top of the gauge (shown in green). Render the line with the same texture attached, just without the step( code - only the blue portion will be visible then.

Not the answer you're looking for? Browse other questions tagged shaders gui graphic-effects masking or ask your own question.

2
Direct3d Techniques and Windows 8
5
How to render a curved horizon when rendering terrain far away
3
Bullet holes on curved surfaces and corners
0
How to create spaceship 'ion trails' that can be curved in Unity?
5
Shader / Reconstructing position from DEPTH in VR through Projection Matrix
4
Differences between particles and using shader in creating effects
4
How to make curved GUI in Unity?
1
Low fps on Arm Mali GPU
1
Curved 3D health bar