In fooling around with my own 3D display engine I've been able to get a few modest features working, and I've come close with this latest one - line culling - but I fear in order to do it correctly I'll need to backpedal a little bit and start establishing more attributes in my basic wireframe objects. I'd like to avoid that if possible because I legitimately haven't needed it until now (maybe).

The basic '3d object' class is essentially just lists of lines, points, an RGB value for color, and a few self-transforming methods for basic movement and rotation.

No vertex order, no collection of 'faces' or 'sides' or anything, just points and lines and a color.

I've tried to introduce a culling method into my view object that uses all the possible triangles that each line could be an edge with, and then checks the dot product of that triangle's outward-facing normal against the imaginary line from the camera to the shared point in the triangle (v0, pt_a, etc).

This works for certain shapes a lot better than others. Sticking to platonic solids for now - tetrahedrons and cubes are perfectly drawn, whereas octahedrons (especially rotating ones) have flickering back-end lines. 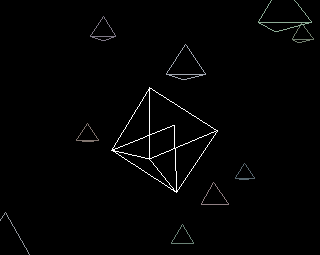 I did try to include a line about confirming the existence of line BC -- that is, the imaginary 'third line' in the triangle -- and all of a sudden, all my cubes disappeared! Because there would never be a third line in its series of right-angles, and so there was nothing to render anymore.

My question is -- do I have to establish faces/sides/etc in order for this to "just work", or is there a way to suss out which pairings should not be considered, without just excluding certain shapes from being rendered at all?

My question is -- do I have to establish faces/sides/etc in order for this to "just work", or is there a way to suss out which pairings should not be considered, without just excluding certain shapes from being rendered at all?

Yes. The problem is that its completely ambiguous what a face even is in your formulation. Right now, you're implicitly assuming all points and lines are on the border of a solid object, and that they have a consistent "outside" and "inside".

However, without information about normals or the volumetric properties of the shape, you have no means of determining the correct orientation of each face. You're left trying to guess the normal from the fact that the shapes you are drawing just happen to be convex. This is a losing battle, in my opinion.

Why not introduce the concept of triangles and winding order? There's a reason graphics libraries do this, and you just rediscovered it. It's not that difficult to implement either. Just reinterpret every three points as a triangle and assume a winding order. Then the code doesn't have to do any checks to try to compute a face normal -- the work goes into properly modeling the shapes instead.

I would prefer to make this as a comment, but I don't have the rep yet.

While what you have isn't the easiest or most recommended way to go about that, it theoretically could work. You probably have a bug, my guess is that the cross product is trying to cross a line with itself on your more complicated shapes and returning a normal of length 0.

Also, if your normals point the wrong direction, you don't need to recross them, you can simply just negate all the values (manually, or multiply the normal by -1.0) and you'll have a normal pointing the opposite direction. And, cross products aren't guaranteed return normalized vectors, so you'll probably want to normalize the vectors you get out of them before you use them.

5
Handling polygons in multiple nodes of an Octree
2
Back-face culling in 2d OpenGL game
2
Deferred rendering with both Clockwise and CounterClockwise culling
3
If I use my own normal values, should I turn off winding order culling?
1
Geometry problem for area of sight
0
Ambient occlusion: Correct culling after anisotropy correction
0
Broken back face culling