We are tasked to implement some heuristics but one of them is really confusing to me.

A. If the character is stationary or moving very slowly

B. Else if the character is moving with some speed

Hmm, a speed-dependent arc (like a narrow perception zone, or a cone of perception) , you say?

The text book pretty much has made up this term, it is not a standard term as far as I know.

What comes to mind is the following image... 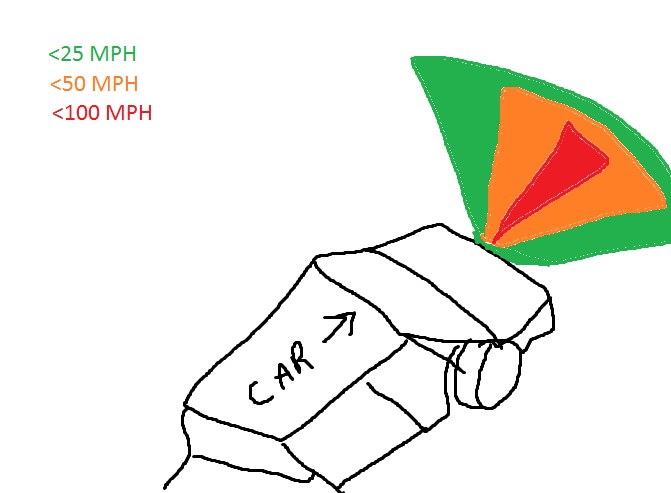 "Speed-Dependent" brings up the idea that the 'cone' changes in size based on (aka 'dependent on') the current speed. For instance, the faster that you are going, the less 'amount' you can turn (and as per B2, if your target is not within this cones angle, then you need to stop the car, and turn slowly in the right direction.

In pseudo code, I think this is pretty much asking the following:

I personally would add a lot of nuances with slowing down the car (if you are not just using unity's physics for instance), but that is the gist of what they are asking. Hope that helps!

'Speed dependent arc' is not a common term and has no specific meaning in game design. The textbook refers to cases where the character is already moving, but not necessarily directly towards the target. If the target is behind you, you would stop, turn around, and start moving again, but if you were moving in roughly the right direction before, you would not stop to do a small rotation. You would instead make the turn on the move.

To decide whether to go for option B1 or B2, you need to define the region in which the target is allowed to be for your current movement direction to be considered 'good enough'. The size and shape of this region (or 'arc', as the textbook incorrectly calls this) may or may not vary with your speed, hence 'speed dependent arc'.

Not the answer you're looking for? Browse other questions tagged unity ai heuristics or ask your own question.

21
Collision 100% avoidance implementation
1
Trouble With Quaternions and orbital camera:
0
(Unity) Physics based movement vs Straight position change
3
Unity 3D - Rotating an object in relation to its velocity
2
Unity rigidbody exhibits a premature max speed
1
AI: dealing with movement driving the same inputs as the player
2
Is speed runs ranking mechanism heuristic or statistics based?
1
How to completely stop the camera from clipping into the ground
1
Calculate heading required to turn ship so that its weapon can fire at target