Physics-based rotation with an array of pixels

Say I have a simple system, that has a large array of pixels with their own weight, velocity, coordinates etc. (by using classes) if each of those pixels can be connected to 4 other pixels (top, bottom, left, right) how could I let that object rotate, according to physics. An example of this is where I might have an array of pixels that makes a circle, and a slope, if I put the circle at the top of the slope, how would I compute the circle rotating while going down the slope?

One way you could do it is by simulating it as a grid of particles and springs, and then performing physics on each of the particles. 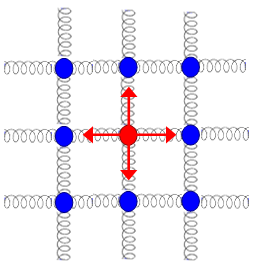 From this numerical simulation, you will get some reasonable (but pretty buggy) physics. You will also get some nice squishiness to the simulation, which could be desirable. Depending on the size of the sprite, the spring-mass model might become infeasible. At that point, you will probably want to just represent your objects as polygons rather than pixels, by creating a convex decomposition of the sprite as polygons, and throwing it into a physics simulator such as box2d.

EDIT: I should also say that if what you're looking for is rigid physics, you can still use the spring model. Just compute the geometric moments of the particles, and use these as the rigid position/orientation of your object. Be warned: very computationally expensive!

23
Momentum and order of update problems in my physics engine
8
How to implement friction in a physics engine based on "Advanced Character Physics"
8
Movement & Physics in an entity-component system
0
Rotate a plane defined by its normal and its distance
7
Why does physics not behave consistently in Unity?
0
Rotating a group of bodies in Phaser
3
How do I get an object to rotate in world space via RigidBody.AddTorque?