I've recently been working on a hobby voxel world recently.

I'm currently interested in ideas or solutions which would enable me to basically step up and down the Y-axis 1 horizontal block slice at a time, effectively making all upper horizontal slices transparent so that I can see objects/terrain/units under the earth.

[A quick visual attempt at describing the problem] 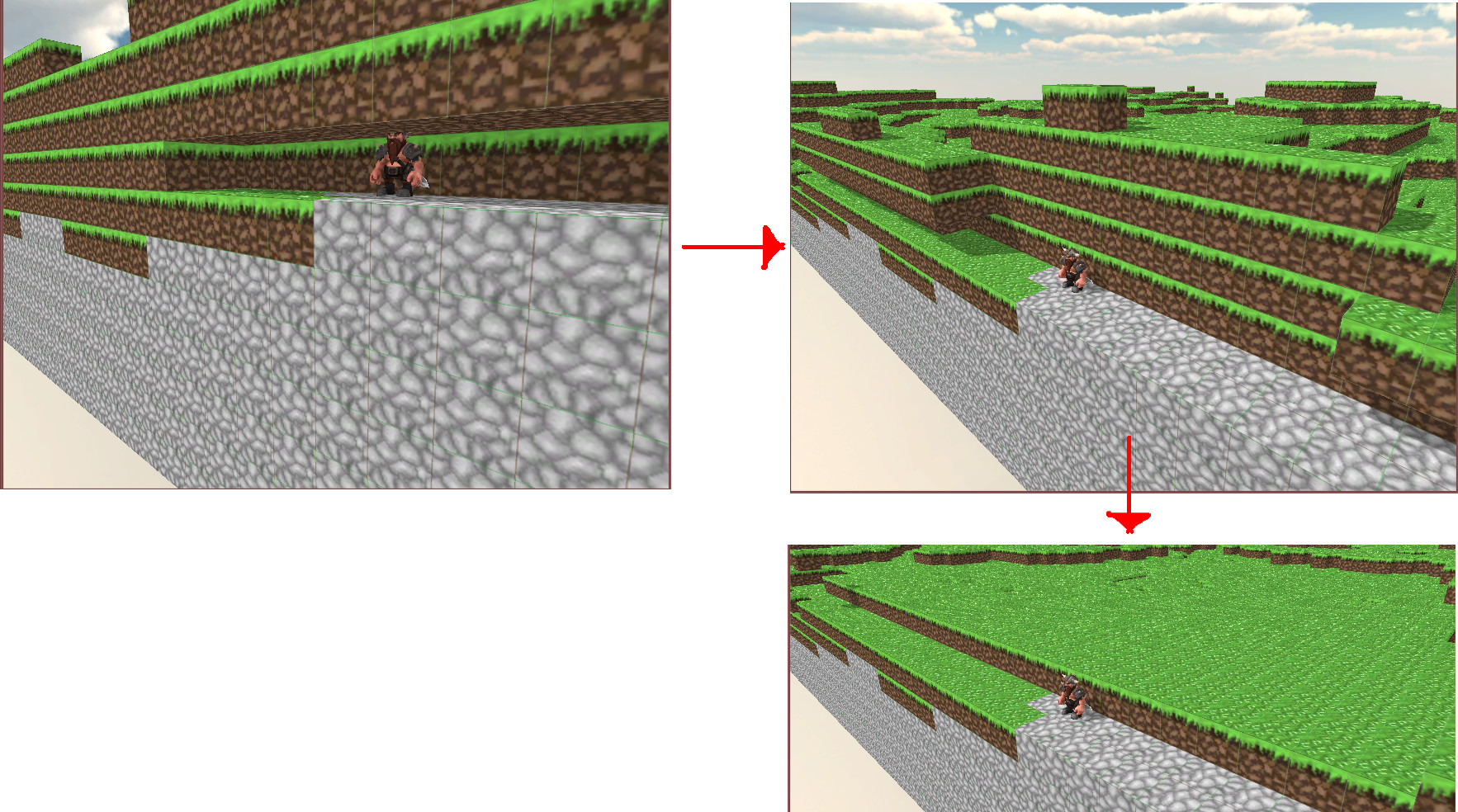 I've done a bit of googling on the subject but perhaps I'm not describing the problem set correctly because I'm unable to find anything satisfactory.

I know that a few options must be out there as I've seen examples in other engines and games (Byte56's Age of Goblins tech demo and Gnomoria etc). I'm guessing an algorithm via some magic shader math would be perfect.

When I implemented this, I had hoped to do it all via the shaders. I planned on just passing a global Y coordinate into the shader and having the geometry shader just flatten all the terrain geometry above that Y coordinate to flatness. This works great if your game doesn't have any overhangs or caves, though this is unlikely with a voxel terrain.

What I ended up doing was a combination of shader and new geometry. I used the shader to remove all the vertices above the "slice level". This leaves a hole in the terrain wherever terrain has been removed, which is where the new geometry comes in. Like you I didn't want to have to rebuild chunks, so I just built a cap. Each chunk was responsible for building a terrain cap at the slice level. This was much faster than recomputing and building a whole chunk since it only needs to happen at one layer.

The two steps are:

Additionally, in my case I didn't want the player to see caves that hadn't been discovered yet. I implemented a feature where only 'air' cubes that were connected to the outside world would be visible. This was done at terrain generation time. I'd walk all the cubes connected to sky and mark them as 'found' along with any solid cubes touching that air. Whenever mining happened I'd start a new walk from that location to see if it reviled any 'hidden' pockets (like caves).

Any cubes that were not found show up as a black void texture. Where the found cubes would have the texture appropriate to their material type.

This was all done with a custom build engine. I haven't used shaders in Unity so I'm not sure what pointers to give you for implementing this in Unity.

Not the answer you're looking for? Browse other questions tagged c# unity game-design voxels or ask your own question.

7
Skewed: a rotating camera in a simple CPU-based voxel raycaster/raytracer
0
Rotate object Up/Down/Left/Right in any orientation
5
How can I normalize a vector if I am handling movment of each axis seperatley?
8
Picture rendered from above and below using an Orthographic camera do not match
0
Random Y Axis Movement Within Set Limits (C#)
0
In Unity3D, how do I move the camera with the mouse without spinning it on its axis when looking down/up?
1
Voxel blocks world physic
8
Storing voxels for a voxel Engine in C++
0
Moving a top-down camera while keeping its height constant
0
Player angle following camera