Relative movement in Box2D (keep object from falling off planet)

I'm creating a game with planets orbiting around a sun, like this: 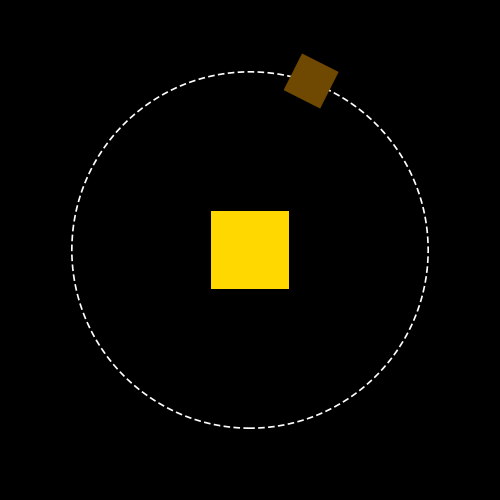 Now imagine a player standing on the planet, the planet moves at a velocity of 20 m/s. How do I prevent the player from falling off? I have to give the perception to the player that the planet isn't moving.

I got the gravity on earth working, but I don't know how I can keep the player on the planet! I have thought about two solutions until now:

I think there is another (better) way to fix this problem, but I haven't found a solution yet.

It works now! I have created a seperate Box2D world for every planet and Solar Systems. The Solar System rotates the planet, so it looks like the planet is rotating. But the player (in the world) isn't rotating at all.

Not the answer you're looking for? Browse other questions tagged box2d physics jbox2d .

38
About floating point precision and why do we still use it
3
Non-physics character movement in a Box2d Environment
6
Increasing efficiency of N-Body gravity simulation
2
libgdx default saving mechanism for box2d world
1
Box2D object wont move until tons of force is used
2
What is wrong with my 2D orbit calculation?
3
How to implement rotating rectangle around circle in libGDX Box2D?
4
Computing a full revolution for an arbitrary orbit?