How to calculate a 3D orientation from 2D vanishing lines on an image?

Let say I have a image that represent a 3D scene. I did not have the 3D camera orientation of that scene (left, up and forward vectors) and i'd like to calculate it. 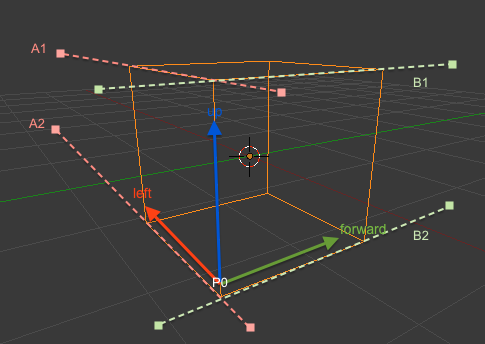 A1 and A2 are vanishing lines for the plane defined by left and up axis.

B1 and B2 are vanishing lines for the plane defined by forward and up axis.

Is there a way, from that information, to retrieve the 3D orientation (in world space) of the 3D scene (so the left, up and forward vectors) ?

Once the forward and left vector are calculated getting the up one is trivial : cross product would do.

EDIT : As Peethor stated, there was some missing information to get what I wanted. I have update question and picture to add more details and make it more clear.

You can look into the Perspective n Point problem. I think that's what this issue is officially called.

Well, getting 2d orientation from 3d points can be done by multiplying it with the world, view, and projection matrices. You could reverse these calculations. The thing is, you don´t know depth. What you get is a line inside the viewing frustum , between the near and far clipping plane of the camera, that tells you where you see this point. But there is no way to know how far away from the camera it is.

UNLESS of course, these points are always on a certain plane, but that´s unlikely given the nature of your question.

Not the answer you're looking for? Browse other questions tagged 3d mathematics projection or ask your own question.

0
Isometric screen to 3D world coordinates efficiently
0
Moving along a flat plane with accordance to camera view
1
Problems with 3D rotation when creating a 3D skeleton
6
How do I calculate the normal of a plane defined using homogeneous coordinates?
2
Coordinate spaces and transformation matrices
3
What kind of projection is ScreenX=X/Z, ScreenY=Y/Z?
0
Projecting world coordinates to screen coordinates issue - points disappear when origin not in view
12
Camera for 2.5D Game