I'm making a 2D game with pads and balls, sort of like Pong, in Unity 4.6.1. The calculations, however, won't be (very) Unity-specific. The pads are going to appear in various rotations, and therefore the physics for bouncing the balls off the pads, have to be vector-based.

EDIT: The solution to the proposed problems is posted at the bottom!

On the image below, the red arrow is the velocity vector of the ball. The effect of "Point 1" is the blue arrow, and the end-result implementing the functionality of both "Point 1" and "Point 2", is the green arrow. 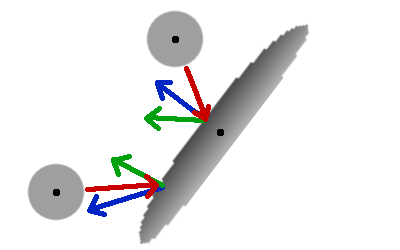 Using the code below, I almost have it going, but not quite. It's not working consistently.

Mind the big edit below! "Point 2" has been solved.

"Point 1" isn't being computed correctly, mostly because I'm having trouble finding a calculation that's precise. When I created my first Pong game, it was easy, because I could just see the difference in ball.y and pad.y and hold that against the width of the pad. I can't for the life of me figure out how to do that using vectors.

"Point 2" is giving me trouble, because I can't figure out how to calculate the normal vector for the pad. The calculations noted in this other answer and here say, that I need to get this normal correct to get the right bounce.

This code is in "OnTriggerEnter2D(Collider2D col)" on the Pad:

Result of the current code is, that everything seems to almost work, but this image shows a situation that happens often, which proves it doesn't. Red arrow is the velocity vector of the ball, and the blue is where the pad sends it upon being hit. 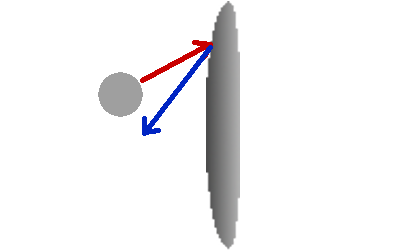 As the code-comments state, I'm not sure which parts I'm doing correctly, but I'm sure it is solvable. I would very much appreciate a helping hand.

I've solved part of my problem. Namely "Point 2". EDIT: For the full solution, scroll down further!

This bounces the ball from the pad, as if the pad was a wall, and it works at any angle. So far so good. The missing piece I was looking for, was that _transform.up is essentially the normal vector for my pad. It might be _transform.right or an inversion of either, depending on how the sprite is positioned at import. Mine is positioned like so: <=====>

Setting n = _transform.up and v to ball.rigidbody2D.velocity is redundant, but is in this example for clarity, so the function retains its variable-names, v and n. 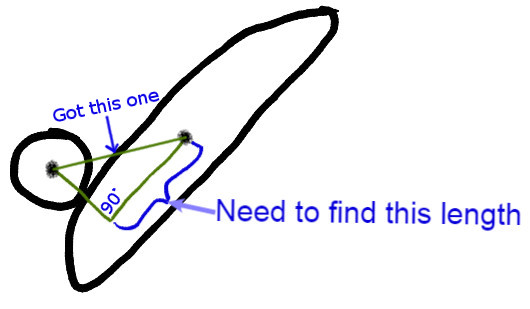 It's a right triangle, and I know one side (position of the ball to the position of the pad). I need to know that length, and I need to figure out how I can know which side of the middle the ball struck. Otherwise, I won't know in which direction to apply additional force, left or right.

Rest assured, I will post the complete solution when I find it, so that others can use it!

I've kept some extra variables, to make it easier to see how they fit into the mathematical functions. Optimize it yourself :) Don't make local variables if you can help it!

This code is placed inside my script on the pad itself, in its OnTriggerEnter2D(Collider2D col). The ball has a rigidbody2d which is NOT a trigger, but the pad is a trigger.

A quick guess, your raycast collides with the ball. Usually you shouldn't call a raycast without specifying what objects it is allowed to hit.

Also notice that your calculated point of collision, and thus also the calculated normal, does not take the size of the ball into account. If the ball is small this might not be a big issue, but it could lead to the ball intersecting the pad without the raycast hitting the pad.

To find the length you marked you simply need the dot product of your centre-to-centre vector and a unit vector along the length of the pad. That will give you the signed length.

Using the collision normal still seems like a good idea, in my experience getting the physics right gives a pretty good feeling for the player.

Not the answer you're looking for? Browse other questions tagged unity mathematics vector .

15
How do I calculate rotation caused by bounce friction?
1
How to get a point to the left/right of a vector
0
How do I calculate the bounce vector of a ball hitting the starting point of a segment?
2
Simulating beer pong physics in Unity
5
Bouncy Ball stops without enough force
0
Unity Change Ball Direction after hitting paddle in a Pong game (like in dx-ball)
0
Preventing overlap in OnCollisionEnter2D
0
Understanding use of dot product in speed boost pad