What is "convexity" in the context of game design?

I have overheard game designers mentioning something called convexity in games. This seems to be a game-design-specific concept, different from (although possibly related to) that in geometry or game theory. Unfortunately there are very few sources online mentioning it, let alone a definition. From what I could gather, it has something to do with player choices.

So what is convexity? How does it manifest in a game? What's an example of it, or the lack of it? Is it a good thing, a bad thing, or if it depends, when is it good, when is it bad?

The oldest reference to "convexity" I could find was a paper that cited S. Rabin's "Introduction to Game Development" concept

A branching narrative where multiple paths through a game converge.

My words, not his. Rabin's actual words are:

"[player choices] gradually narrow back down again to a few, or single action the player must accomplish" 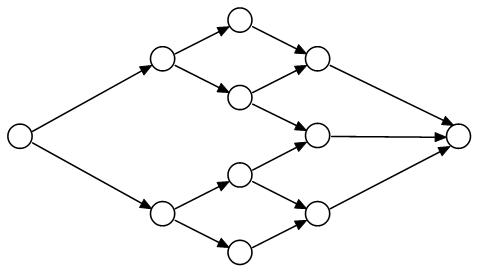 Used to represent a "convexity"; one ending point with multiple paths to it.

This can be used to give the player the illusion of choice by presenting the player with many ways to get to the same outcome.

Extra Credits made a good episode about the illusion of choice where they discussed this without using the term "convexity", they used the term "beads on a string" narrative. I recommend watching this episode to get a sense of why this narrative structure is useful as a game designer.

The short version is: creating multiple paths that get to the same point allows you the designer to create the illusion of a larger possibility space for the player than you actually have to spend budget implementing.

This is good when the player doesn't notice. I like to think of Randy Pitchford's presentation about the "magical side of games" where he discusses the choices available to the player in the first few moments of Borderlands that have absolutely no bearing on what happens in the game but enhance the player's experience just for having those choices available.

This can be bad when players do notice and feel constrained by it; the term you'll hear in RPG circles for this is "railroading". As @Peethor mentioned in the Mass Effect series, when players realized the multitude of "choices" they made throughout the series had effectively zero influence on the final outcome. I would add that Lionhead's Fable was similar, all of the choices made in the morality system during the entire game were completely wiped out by one big unavoidable event at the end. Breaking that illusion can be painful for players. It can also be powerful, as in Final Fantasy X, I won't spoil it but the convexity in that game was such a surprise that I was happy about being devastated by it.

Convexity is what makes a player feel freedom of choice, while being steered down a predetermined path. For example, take any game in the mass effect series. You usually get a lot of different choices in conversations, even allowing you to choose if someone should live or die. If the person you killed in the conversation was supposed to do something meaningful in the story, he's usually replaced by somebody who will then do that meaningful thing.

You get choices on how to complete a mission, but the story will not continue until you've completed it. The pinnacle of this is actually the ending of mass effect 3. The game allows you to choose a lot of different things and in the end [SPOILER ALERT] you really only change the color of the explosion.

Convexity is a good thing, because it allows the player to have freedom of choice, while still following an awesome story. Convexity is also a bad thing, because developers usually boast about you being able to choose your own destiny while really, your choices boil down to the same scenario. (Sometimes conversations let you choose to piss someone off or kiss his ass. Pissing him off will start a fight, while kissing his ass makes him angry... starting a fight) Max Payne is an example of a game without convexity. In the first game, you will have the choice to kill an innocent person. Do so, and it's game over. That's no choice, that's just linear gameplay. Max Payne 2 allows you to kill someone you believe is innocent. He's not. If you let him live, you'll have to kill him about 60 seconds later.

There are games where you get true freedom of choice (or something very close to it at least), but because the game has to be able to adapt to an infinity of scenarios, the gameplay usually isn't very deep (take spore for example; millions of planets to explore and they're all empty, boring pieces of land with little diversity.)

So really, it's not a good or bad thing. It depends on what you want your game to be. It is a huge impact on the flow of the game, so it's a good thing to consider when designing your game. If you're forcing a player down a predetermined path, it better be one hell of a ride.