I had previously implemented this in 2D without any troubles and the results were flawless in all of the diagrams I generated. However, I have since tried to implement this in 3D and have now encountered issues.

My implementation of this appears to work fine in 99.9% of cases which leads me to believe that perhaps floating point/rounding errors may be the problem or (more likely) my understanding of the code used to determine the circumcenter is incorrect.

I have based the following implementation on this answer from How do I find the circumcenter of a triangle in 3D?

The screenshots below are of two separate graphs both generated by creating the Voronoi cells/regions in nested for-loop's before attempting to solve the graph. I have tried creating the points randomly, hard coding them, setting different values along the Y-axis or having them all set to a specific constant on the Y-axis, all of which exhibit the same behaviour.

These examples do not use Lloyd relaxation but for the sake of completion, running the solver over several iterations also produces incorrect results.

I have been trying to debug this for weeks now and cannot for the life of me understand why this does not work. My understanding of the math is fairly solid but I really can't begin to narrow this down to resolve the issue.

It would appear that when solving the graph, the circumcenter for three of the nodes is sometimes incorrect (or so i'm lead to believe from the visual output). However, the Delaunay representation appears to be correct which leads to even more confusion on my part. 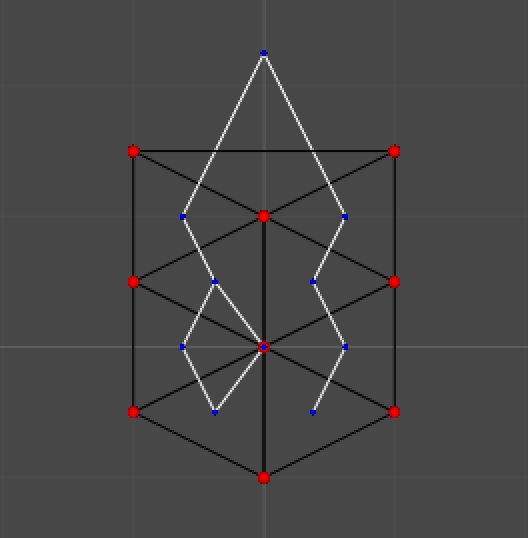 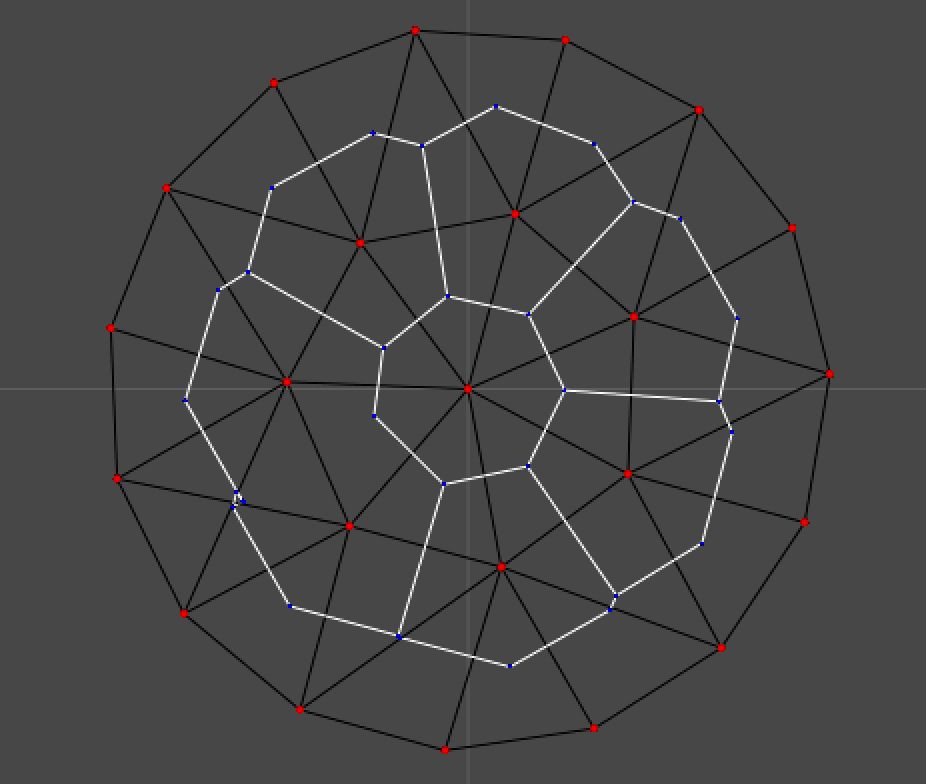 In the above images, the lines and points represent:

If anyone can shed any light on this, or point me in the right direction, that would be greatly appreciated.

It's hard to tell without source code but it looks like some triangles are overlapping one another: 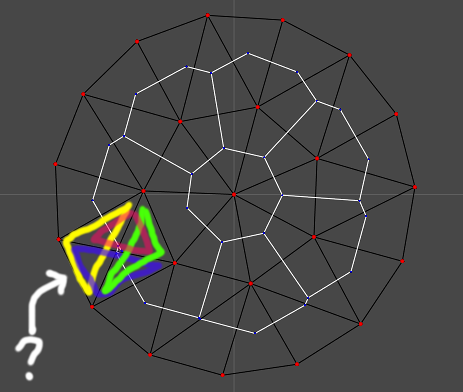 I'm guessing another issue is that segment A-B is not always considered the same as segment B-A and you end up with internally 2 different edges sharing the same points.

Because the edge looks twice as thick on your screenshot Red & Blue are probably 2 edges that should be 1, same with Green and Purple: 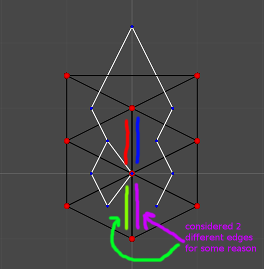 It could be a bad triangle winding with one edge going backward.

To debug this I recommend printing a log and analyzing it by hand.

First you need to identify the exact edge/vertex indices that are causing issues, then recompile your program to print debug information whenever processing those particular edges/vertices.

You'll be able to gradually narrow down where the error occurs.

Not the answer you're looking for? Browse other questions tagged graph or ask your own question.

8
How do I find the circumcenter of a triangle in 3D?

11
To scene graph or not to scene graph?
2
Splitting Graph into distinct polygons in O(E) complexity
8
Delaunay triangulation. Where to start?
7
How to create a map from graph
4
Procedurally generated paths with intersections
0
Coloring a Voronoi Graph
6
How to randomly create a fair maze for a multiplayer game?