I'm working through a game in Slick2D and am now focusing on a lot of the graphical end. It's going pretty well other than a couple of issues with alignment. An image illustrating both of these issues here: 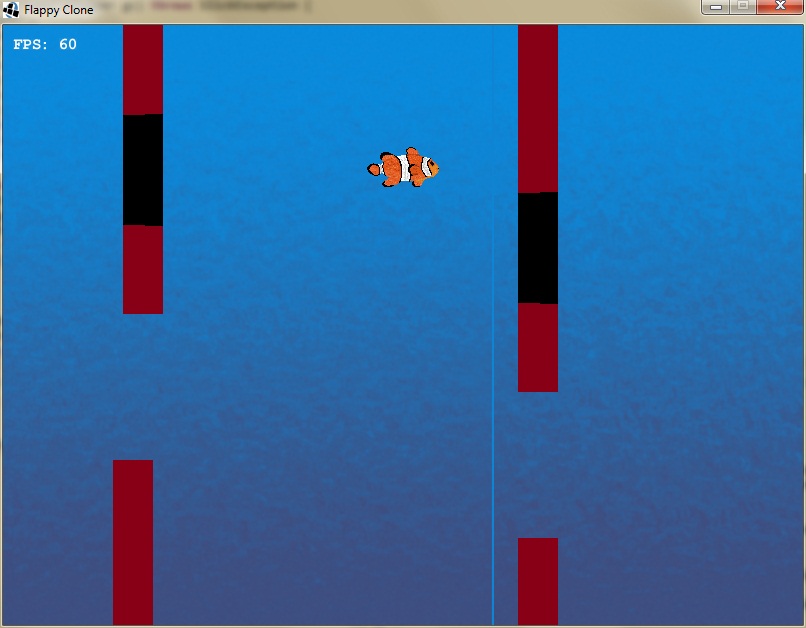 Firstly, the background. I have 2 Entity objects containing coordinates, velocity, and an image for the background. Both contain the same image (1600x600). For the first, x=0 and for the second, x=1600. They both move to the left at a speed of 1 pixel per frame. No matter if I make the offset smaller (like 1580), I am still left with a gap showing the background colour. I've put the two images together in photoshop and they blend together, so it's not an issue with the image. Here is some relevant code:

In other words, what I expect my code to do is have both images move left one pixel each until the left image reaches -1600 (-1*bg.getSpriteWidth()), at which point the right image will be at 0, and with a width of 1600 the first image would be moved to 1600. This is, at least, how I expect my code to work. bg.update() calls a method which adjusts the position based on the velocity given, so it will move x backward by 1 each time for both backgrounds.

Secondly, the misaligned walls. As you can see in the image, the walls on the right are perfectly aligned. They move left together at the same velocity in the same way as above. For some reason, however, as the walls pass the mid-way mark (where the fish is), the upper wall's velocity slows for a slight second which misaligns it with the lower wall (though the velocity returns after and they stay that constant distance apart). I actually have found the code causing this (when commented out it stops), but I cannot see why it would do such a thing. The values still remain correct, but the graphical output is distorted.

It's the wallList.remove(i); line that is causing this offset to happen. When I remove the line, the walls stay aligned as intended. Any ideas? Are these just imperfections of Slick2D? Perhaps there is a better way for me to do these things?

If you remove a wall then the next wall at index i but you skip it.

Decrement i after the remove or use an iterator based loop:

Not the answer you're looking for? Browse other questions tagged java graphics lwjgl slick or ask your own question.

14
How do I handle collision detection so fast objects are not allowed to pass through walls?
1
How to efficiently manage animations and/or textures (resources) in a game?
2
Lightweight Simple Fast-Object Collision Detection Algorithm/Logic
1
Random lines away from images in java2d opengl game
1
Slick2D: Initializing graphics object before game loop
0
How to draw multiple large background images using libgdx?
7
Isometric graphics with fake perspective
5
Correct way to integrate scaled axis angular velocity into a quaternion
2
Calculate average velocity of the object before the game start