Connecting a model's joint to the joint of another model 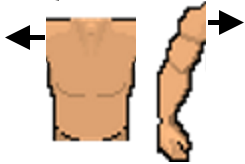 Where a joint is defined (relative to the model's untransformed position) as something like:

Browse other questions tagged 3d mathematics matrix transformation or ask your own question.

5
COLLADA: Inverse bind pose in the wrong space?
2
How do I build a matrix to translate one set of points to another?
26
Transform Matrix multiplication order
0
Common way to store model transformations
7
Matrix rotation wrong orientation LibGDX
2
Cumulative transformation matrices for hierarchical object transformations
1
Terminology for the way Transformation Matrix Data is treated
1
Vertex Skinning, Bone matrices question
3
How and when do the model to world, world to view, et cetera multiplications happen?