Why are normal maps predominantly blue?

Why normal maps are predominantly blue instead of a random color?

I guess normal vectors of a 3D object can point in every direction, like: 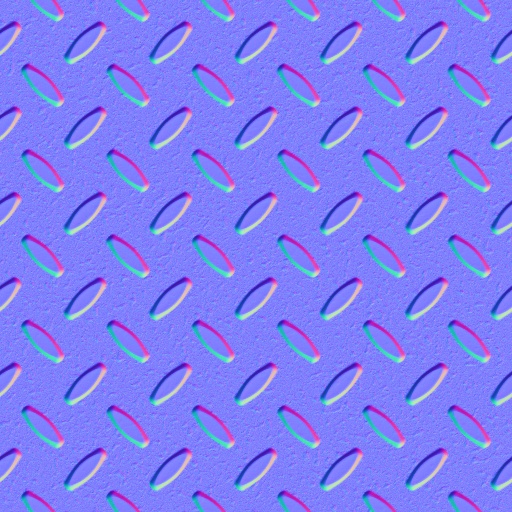 There are two types of normal maps commonly used in game development. The way you are thinking they should work is the way one type works (model-space normal maps), but most games use another type (tangent-space normal maps) which is why you associate mostly-blue textures with normal maps. 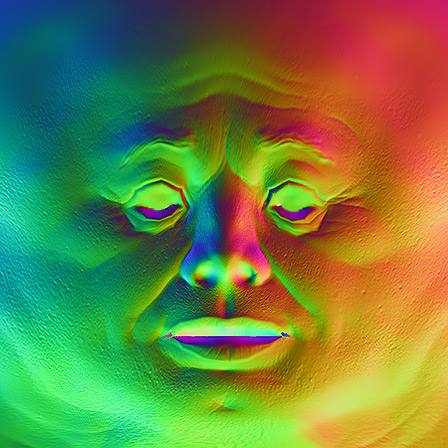 Tangent-space normal maps are usually light blue. This type of map defines normals in a coordinate space unique to each pixel's position on the surface of the mesh. It uses the (interpolated) vertex normal as the Z axis, and two other orthogonal vectors, called the tangent and bitangent, as the X and Y axes. Essentially, you can think of the normals in the map as an "offset" from the normal for that pixel calculated by interpolating the vertex normals. The tangent and bitangent vectors are also interpolated from vertex data, and determine which direction on the mesh corresponds to "up" and "left" in the normal map. The image provided in the question provides an excellent example of what a typical tangent-space normal map looks like, so I won't provide another example here.

The components of a normal normally (no pun intended) range from [-1, 1]. But components of a color in an image range from [0, 1] (or [0, 255] but usually they're normalized to [0, 1]). So normals are scaled and offset such that the normal (0, 0, 1) becomes the color (0.5, 0.5, 1). This is the light blue color you see in normal maps, and it indicates no deviation from the interpolated vertex normal when using tangent-space normals.

If the texture were, say, red, then that would mean that the normal map is a surface that's mostly pointing off to the right. You can see that feature on your sample image as the right-most edge of the bumps have a reddish tint to them.

A complete surface of a reddish color wouldn't make any sense. That would indicate a surface that is entirely facing off towards the right. That would just be modeled with geometry, not part of a normal map.

Not the answer you're looking for? Browse other questions tagged graphics-programming normals .

1
How do I cover a plane in a bumpy foam material effect?

5
Understanding normal maps on terrain
0
Normal Map Issues
2
Why isn't the bitangent calculated?
1
The math of normal mapping without a dot product
4
I want to render some surfaces in GLSL with normal maps, and some without
1
What are projection independent ways of determining whether a normal is facing the viewer?
1
Consistent normals at any angle in bezier curve
0
TBN matrix for normal and parallax mapping
0
Convert a dot product scalar for a triangle's slope, into a translation ratio?