Finding a moving target in a maze

I'm making a game that is a bit of a mix of snake and pacman.

Basically, two players go through the maze and each time they pick up a piece of candy, a cube is added to their tail. If one player touches the other's tail, he steals that piece for himself and the game is over when one player has all the pieces.

Right now they both move randomly unless there's a piece of candy one space away that is not their tail.

I'm trying to find a method/algorithm (preferably a different method for each player) for both players to target/avoid the other player. Any advice? 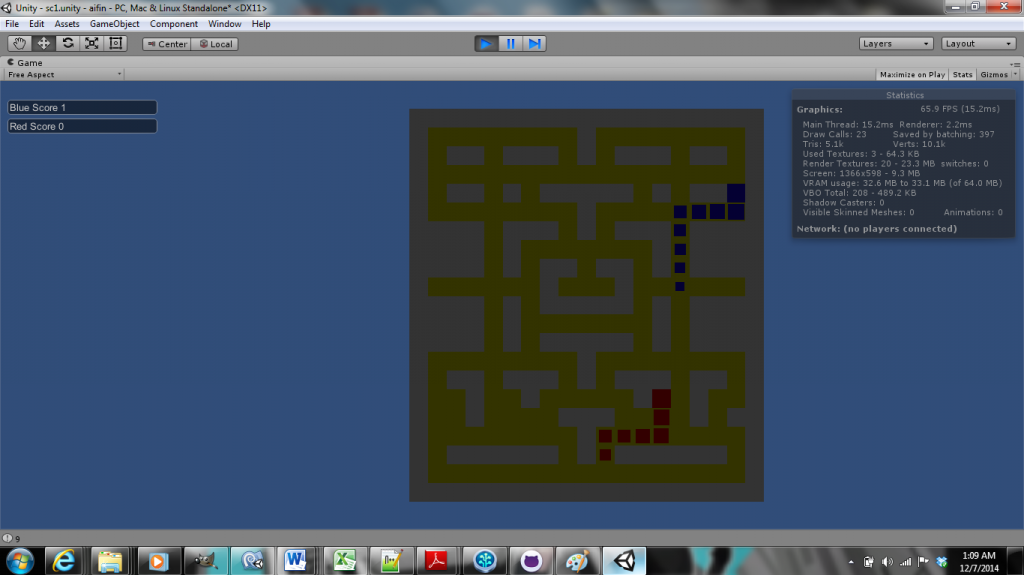 For an algorithm that finds paths for snakes eating fruit, see this related question: How to find a safe path for an AI snake?

As for the adversarial part - snakes eating each other's tails - unfortunately you've created a game where either: both players can force a draw, or the game will never end. This is because:

So the only way a game could end is if the snakes are an odd distance away, because that's the only way one snake could eat the other's tail completely, and this happens:

But notice that snake 1 could always force a draw if it also moves towards the other snake, making their heads run into each other. Also note that if the snakes are an even distance away, the game could never end.

So you'll need to change your game design, like add other winning conditions, such as:

It depends on how complex you want your AI behaviors to be. If you want the most realistic, do some research on the A* algorithm. The other easier option would most likely be depth first search. Definitely look into AI pathfinding and you should find your solution.

Not the answer you're looking for? Browse other questions tagged unity algorithm grid maze or ask your own question.

8
How to find a safe path for an AI snake?

5
Matchmaking by user-supplied parameters
3
How can I divide a 3D mesh into small pieces?
0
Algorithm/ Logic of identifying a circle in Go game
1
Finding dead ends in maze
2
How can I bake several variations of a substance?
1
Generating Arrow Maze puzzles
7
How to generate doorways procedurally, on the fly, and guarantee acessibility
1
How to calculate a moving bonus limit
6
How to randomly create a fair maze for a multiplayer game?