How can I make animations "snap" between transitions in Unity?

I have an animator with a few animations in it. These are very basic animations, just changing a transform to slide a sprite around in a cutscene. The issue that I'm running into is that when I transition from one animation to the next it will try to smooth out the animation differences. So if I have something move off the right of the screen, then with the next animation come falling from the top of the screen, it will first quickly slide to the new position.

I also set up two functions (one for X, one for Y) to set the position at the beginning of the second animation, but only one of them were called, and it didn't seem to do anything.

So, how do I get an animation to snap to the starting values of the new animation after a transition?

I finally figured it out.

After selecting the animation transition you can see in the inspector a section with some bars. This shows how long the transition between the two animations will take. You can slide the bar over so that it shows 50%, telling you that the transition will be instant.

Or is it? Select the dropdown next to the padlock at the top right and select debug. The field that we want to change is Transition Duration. Set it to 0 to make it instantaneous.

You might just try hiding whatever it is until the frame where it's in position. Otherwise, it sounds like you want a Broken animation curve. 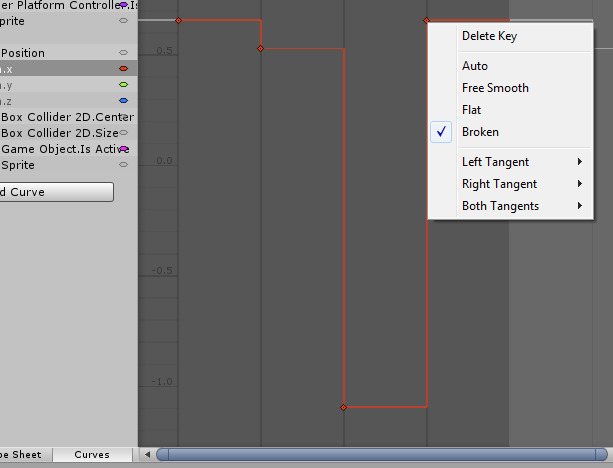 Not the answer you're looking for? Browse other questions tagged unity animation .

1
Animator, gameObject position not being kept
0
Unity - How to move a user controlled animated gameobject programmatically?
1
issues about combo attack system animation
0
How can you sync video files with animations within Unity?