The game is a 2D brawler with depth movement in the vein of Golden Axe, Final Fight, Castle Crashers etc. Characters and environment are all 2d sprites as well. I've had no real issue setting up collision between characters to take the depth into account either.

However, it's just not a proper brawler without higher ground to jump to and pits to throw the enemy into, and that is where I run into a bit of an issue with how best to implement it.

I considered making the collision boxes for the level in the 3D space and having the sprites just translate the z movement of their game object into y movement of the visual component, but I don't particularly like that approach because it feels difficult to work with for doing the level design of matching 3D colliders to a drawn backdrop and placing objects in there.

Any suggestions for a design that is the 2D first, so to speak? Ideally being able to "paint" height levels and pits in the 2D design wise. If it matters, I'm working in unity with a primarily 2d space (though involving the third dimension here will be necessary), but I think the base design problem would be fairly engine/language agnostic.

I think you might be able to achieve this in a 2D space by using multiple box colliders - or just just a range of x & y values, really. I spent a few hours in GIMP editing this up: 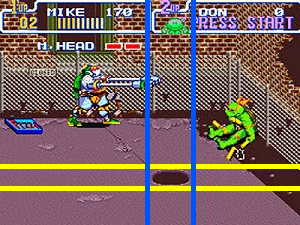 Depicted is an open manhole that the turtles can fall in. Just a singular box collider would work for pits, but I used the screen wide colliders for illustration.

For elevated platforms, you could do something like this: 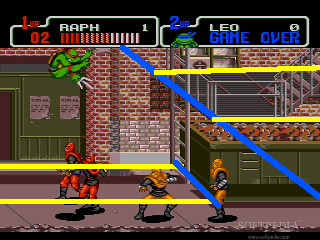 If you the player was colliding with the lower platform, it would make the player eligible for standing on the upper platform (in some way of your choosing). In this picture, the upper platform is well above the typical walkable area of the stage, but using this technique, you could easily have platforms you could walk behind, around, and under, by using a combination of colliders - this way elevated platforms could overlap with the ground you could already walk on. I think it'd boil down to something like this:

There may be things you need to work out here yourself, but I think this general approach would allow you to keep a strictly 2D style and not bother with 3D.

Not the answer you're looking for? Browse other questions tagged unity collision-detection game-design level-design or ask your own question.

21
Collision 100% avoidance implementation
6
How should I approach architecting a data-driven shoot-em-up?
5
How would you design components for an entity like this?
2
Designing Collision Detection for 2D Rectangular Adventure/RPG
1
How to fetch only the sprites in the player's range of motion for collision testing? (2D, axis aligned sprites)
1
How do I simplify a 2D game grid for level management while keeping its by-pixel features?
1
Using logic gates for Sprite Collision Detection - humor an old fart please
0
Improving Rigidbody collision between real-time movable object and other Rigidbodies
3
Swept AABB Collision Detection Conflict with Tile-sized Gaps