I am rendering a fullscreen quad using XNA. I am having an issue where the top pixel line and left pixel line are not rendered. It should be black in the picture. Can anyone tell me why this might be happening? 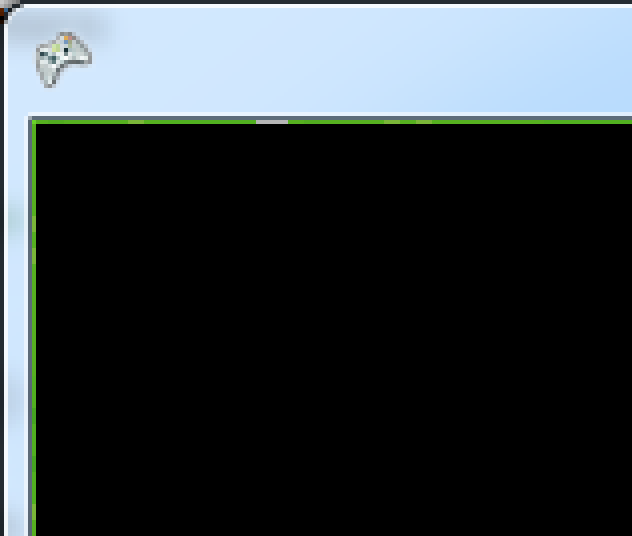 The effect's intent is to fade the screen out or in by adjusting the alpha of the pixel.

Sorry for the late reply, but saw an answer (by GameDevSE's own Josh Petrie) to another question here that reminded me of this one, and it seemed like it could also apply here. Don't know if its truly relevant, but it could be worth a look.

It basically discusses the half-pixel offset problem, in which a pixel can end up being misaligned by 0.5 units due to the differences in placement of the pixel occupying the center of its cell, and the placement of co-ordinates in the standard co-ordinate system. This can result in the actual pixel being offset from the specified point by 0.5 units in the X and Y direction.

In regards to your FSQ, I am also using a FSQ, and I have not noticed this issue with my engine. However, your FSQ does differ from mine slightly, so I'm not too sure if that might also be a problem as well. My FSQ is basically the one described in this guide (pages 5-6), so it also might be worth trying out as well to see if it fixes your problem.

One thing I did notice was your vertices assembly, and how each corner has a TextureCoord of Vector2.Zero. Mine looks something like this:

Another minor part to consider (Especially if your effect has multiple passes) is your Render function. IMO, it should look like this:

This will ensure that the FSQ is drawn once per pass, as you code will currently only apply the last pass in your effects technique. Its a minor thing, but if you have PPC's (Post Processing Chains) built into the shader file (pass 1 draws the scene, pass 2 applies a Post Processing Effect/Filter) then you can get some odd stuff happening.

Hopefully some of this helps. If I come up with or find anything else, I'll include it here.

Not the answer you're looking for? Browse other questions tagged xna graphic-effects or ask your own question.

1
How can I prevent text rendering from looking ugly when in motion?

1
XNA: How to make the Vaus Spacecraft move left and right on directional keys pressed?
2
rendering a spritebatch to a temporary buffer and then offset that to the main screen
10
Drawing a one pixel wide line in 3D space
9
Pixel-perfect rendering to a rendertarget with a fullscreen quad
5
What's the difference between a “Release” Xbox 360 build and a “Debug” one?
1
Is it Possible to create one equipment piece, and handle the manipulation programatically
1
Textures rendering upside down and small with Pixel Shader in Mono Game but not XNA