How do i calculate the velocity of a sprite after it leaves circular motion?

I'm trying to make a game where the character can swing on a rope.

I want to know how the velocity of player is calculated when it stops circular motion. Any help would be appreciated.

This picture exemplifies it well. In the given example the rope pulls the robot with the blue vector (a force in the direction of the rope). Once you let go of the rope, of there wass no gravity the robot would move with equal speed in a straight line tangential to the point he stopped the circular motion. If there's gravity, the only acceleration on the robot is the green vector pointing down.

In realistic accelerated movement, it's often better to control only the acceleration of the robot, and determine velocity as a by-product of acceleration, using kinematic equations. 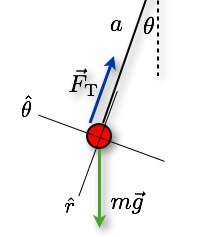 Circular motion already has velocity; what makes it circular is the continued application of a rotating acceleration of constant magnitude. So to let the object leave the circle at the proper velocity, just stop applying the acceleration.

1
Making an object swing from one rope to another
2
How to calculate continuous motion with angular velocity in 2d
10
Calculate bike heading from front wheel heading and velocity
6
How can I change the acceleration of an object to arrive at a particular time?
1
How do I calculate the motion of 2 massive bodies in space?
2
Numerical differentiation to calculate size of circular buffer
1
how to calculate initial Y velocity required to reach target?
3
How do I apply angular velocity vector after a collision?