I am working on a small game engine for practicing purpose and also for putting some of my ideas into action. What I have so far is a couple of systems for rendering, sound etc. The next step is to put all these things together. I already looked into entity component systems, in particular the following article: http://www.gamedev.net/page/resources/_/technical/game-programming/implementing-component-entity-systems-r3382

I think that this approach would suit my needs to a certain level, but I also would like to implement the game logic itself inside scripts. I came up with a slightly different approach: 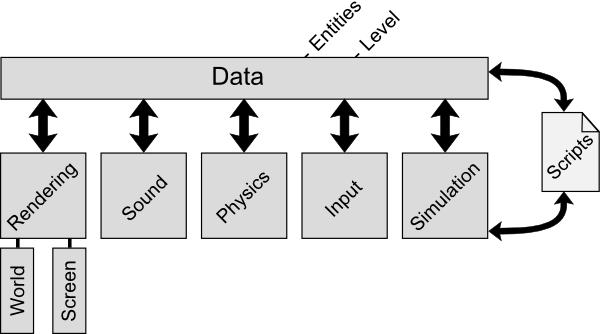 The rendering, sound, physics, input and simulation systems perform actions on the data, which is basically a level object and a list of entities (for technical reasons I have to distinguish between entities and level geometry). The particular systems only perform actions on those entities which match their criteria (e.g. the physics system only handles entities with a bounding volume). In my approach the systems do not directly implement behavior. Instead they are either creating output (rendering, sound) or input (physics, input). The simulation system manages the scripts which may be assigned to entities. The script of an entity consists of two parts, first the initialization code which is executed when the entity is added to the scene, and second the code which is executed once per frame (or less, depending on whether the code contains a wait-statement). Additionally every entity may implement event handlers which are called whenever the input or physics system throws an event (e.g. a CollisionEvent, KeyDownEvent etc.). Entity scripts may define parameters, which can be modified inside the level editor.

My question is, whether this architecture has some severe weaknesses. Since I want to avoid threading, my scripts will be scheduled by the simulation system, which lead me to the restriction that an entity script is called once per frame (which means that loops should be avoided, since basically everything already is inside a big loop). Is this reasonable or is there any better way?

What's the idea in collecting input and outputs? Do you filter it somehow? Sort? That may be costly to do so for every frame. And disadvantage for it would be to have implement every system in two/three places:

But I could misunderstand you. So the second thing I could think of is a hope to always have input/output. Systems are made to change state of entity components so it's all about modifying data. I'm not sure whether it would be easy for you to implement such output as DataChangeOutput (depends on programming language) but it would cost the CPU anyway.

I'm not sure where do you handle your events. But seeing this statement

looks dangerous. I believe that system should handle events in proper moment. Having events the way you described may lead into some incosistences due to order of call. It's best to collect events and handle them in proper time in the system queue. That way I don't see a reason of entities handling events.

This doesn't seem as a hard point but did you consider to implement Object Pools? Garbage collector may kill your performance very quickly in such architecture.

Parameters in scripts - I feel that's approach taken from Unity3D. Some people believe it's good but the thing is that it's not ECS at all. Parameters are data and data should be put into Components (the C part). Parameters not fitting into components should be put somewhere else in my opinion, especially if those are static parameters.

But still, having a Script component is a pretty straightforward approach and still puts into ECS.

I know that's you may dislike it but I suggest you to try some ECS frameworks before implementing your own. It's a hard work and when you modify the whole ideas to your current likes, you may be in a place in the future when you have many incosistences. It's best to try already made things first to know how does it taste.

If you're asking for frameworks: artemis-odb or Ash. I prefer the first one but it's Java.

In one word: eventloop.

In more than one word:

event loops allow you to have a complex runtime behaviour with multiple "simultaneous" events, timers, signals and much more without the use of more than one thread.

They are used among other things in microcontrollers.

The open-source GUI library called Qt5 is based on eventloops. In fact, I am pondering why not more games use Qt5 for that very reason (and the fact that it has excellent high-performance, industry tested, cross-platform support for OpenGL/OpenGL-ES, networking, threads, input, media playback, ....

Why not invert the relationship with the simulation system and allow it to be a hookable option in your entity design?

For example, you have a LogicComponent that essentially allows you to associate a specific script (or even a list of scripts) to a given entity. During the initialization of your logic component, it runs an init method from your script and during various update phases, calls the appropriate script function.

Additionally, other components in your framework could have a place where you can either place scripting code snippets that are to be executed for various conditions or allow your components to reference other scripts that can be fired at specific points. These scripts can be inspected during load and appropriate handlers linked to the event loop based on some set API.

For example, your PhysicsComponent may allow you to associate a script that has an event handler for collision. Inside this handler which gets called when a collision is detected, you can implement whatever custom behavior is needed.

While you are arriving at a similar place as your proposed design, the beauty here is that you've now decoupled your script logic into smaller snippets enabling you to reuse as well as modify and affect larger volumes of entities across the board when a change is needed.

I use coroutines. Coroutines are just functions which, instead of returning and exiting, yield while maintaining their state. For example, here is a python coroutine which counts up from 1 to N:

Now, to put a coroutine into your game loop, you simply have to do something like this:

I've also had a lot of success at combining coroutines with behavior trees. Coroutines give you several advantages over simple tick or update functions:

They also have advantages over threads:

However, depending on your language, implementing a coroutine might be slightly more difficult. Python supports coroutines through generators. C# and C++ support them through iterators. Other languages might require some glue to get it to work.