2D sprite 360 degrees rotation according to the mouse

I am trying to make my top down character rotate according to degrees between its position and the mouse. I'm using this code:

But it's not working. At the place where I should get somewhere about 0 degrees - I get about -75. 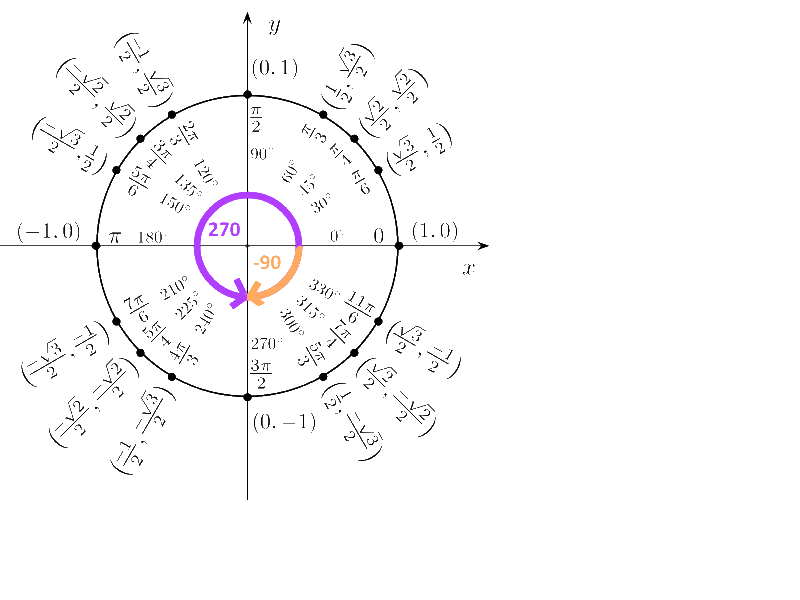 If you look at a circle with the angles marked you will see that 270 degrees corresponds with (0,-1) i.e. straight down.

By convention degrees are marked as acceding in a counter-clockwise direction. They do however form a loop and as such 270 degrees (purple arrow) can also be expressed as -90 degrees (orange arrow) i.e. a quarter turn in the opposite direction.

To further explain the expected results here is a table with the results of the following formula with the corresponding values of x and y.

Not the answer you're looking for? Browse other questions tagged c# 2d rotation mouse or ask your own question.

9
Set sprite to face direction of mouse
1
Looking at the mouse position in a top down Unity game?
2
How to make something rotate a certain amount over an exact amount of time
4
Rotating To Face a Point
0
Accurate sprite rotation with mouse movement
1
How can I rotate my character so that he is facing the mouse?
1
How to accurately capture the direction in which the mouse moves?
0
Unity 2D Rotating Cannon to Mouse Position Inaccuracy Issue