I have an RTS game, with deterministic simulation, but if I want multiplayer to actually work, I need commands sent between computers to be executed at the exact same time. My game's networking is just sending commands between the players' computers, and the simulator executes the commands in order, which, hopefully, will result in each player seeing the exact same game. However, if the commands aren't executed at the EXACT same time, then the simulation will become out of step and everything will be wrong. How could I do this, and are there other ways to make sure everything is in sync?

There are two possible approaches to what you are describing, one wrong and the other useful.

Doing the third approach is easier, there is only one simulation. Synchronizing two simulations would be very hard, to the point of impossible. It is an interesting academic experiment and perhaps could yield useful lessons but does not seem likely unless the gameplay is very insensitve to slight variations in timing which most real time games simply aren't.

This is an example of the graph for easing out and easing in when interpolating / tweening states: 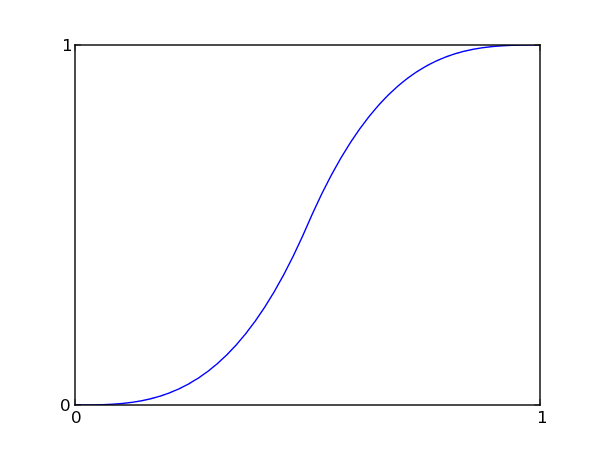 Not the answer you're looking for? Browse other questions tagged networking multiplayer rts messaging realtime or ask your own question.

7
Need help choosing the right networking approach/platform for an RTS
1
How to handle player input in online game with ping jitter?
13
How would a game-state snapshot system be implemented for networked real-time games?
4
Sending Client Input to Server (which way?)
2
RTS Lockstep: How to deal with high latency and packet drops?
8
When to use Command and RpcClient
2
Should the server calculate the time of a player's input, or trust sent data?