Determining if a Point3D passed another

I have 2 points A and B in 3D space (say of type Point3D). B needs to travel towards A and then stop either when it reached or passed B. The direction between the two points is known (can be easily calculated), so velocity is easy to set. How do I determine when point A reached or "passed" (given the direction) point B?

The vector between A and B is B - A. The magnitude of this vector is the distance between these points. If point A is traveling along this vector then it has reached point B when the magnitude is 0 and it passes B when the vector components change signs (positive to negative, or negative to positive) as compared to the original B - A vector. 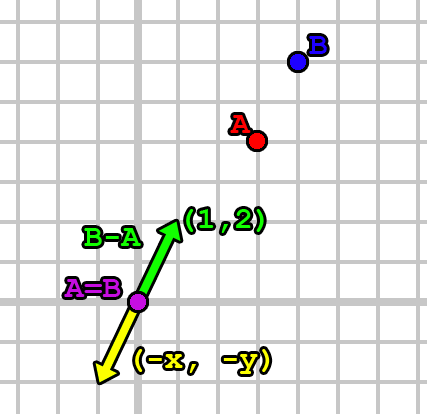 Point A will have passed point B when the signs of the vector components of B - A have changed compare to the original B - A values.

If A is not traveling along this vector then there needs to be a plane that contains B that acts as the threshold. A will start on one side of this plane and when it passes to the other side of the plane it would be considered passed B. Beyond that there orientation would be completely arbitrary.

Not the answer you're looking for? Browse other questions tagged mathematics vector or ask your own question.

4
How to draw a line of a given length towards a given object?
5
What is a good way to determine if a vector is between two other vectors in 2D?
1
Interpolation between two 3D points?
1
Eculidean space and vector magnitude
4
Controlling roll rotation when travelling along bezier curves
3
How to determine if the player between two points?
1
Object Movement / Constant Movement Rate or Vectors
0
Determining if a point is perpendicular to a line
0
Find if one player is visible to the other