How do I procedurally create a directional light cone with an HTML canvas?

To create a directional light effect, I want to draw this kind of transparency mask on an HTML canvas (using context2d): 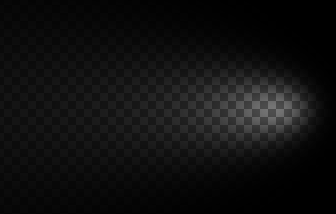 I also want to be able to generate such a mask dynamically. I've tried using arc to create this kind of light cone, but I'm not able to draw nice, smooth and naturally looking light.

When you want a really advanced light engine where objects create shadows, you should look into WebGL and use a 3d engine.

But when you don't need accurate shading and only want objects to create cones of light which illuminate the canvas without respect to content, this is what you could do.

Areas which are all black on the lightmap will also be black in the final output (dark). Areas which are pure white, will be drawn the way they were originally on the input bitmap (bright). Any shades in between will be in twilight. You can also use colors in your lightmap.

Here is a jsfiddle demo:

A word of warning, though: It doesn't work in Internet Explorer because MSIE doesn't support the multiply composite operation yet (even in Version 11). There are workarounds for that, but that's a different topic for a different questions.

Not the answer you're looking for? Browse other questions tagged html5 lighting html-canvas transparency masking or ask your own question.

13
Trying to understand light on Opengl, how to simulate a realistic sun light?
12
How do I create multiple 2D spotlights?
7
Shadows in html5 canvas game
5
How can I create 2D, sprite-based reflections in HTML5 Canvas?
2
Drawing/adding shape objects with the mouse on html canvas
3
JS Canvas - Creating 2D Game lighting effect like Terraria
0
How do I make an HTML5 canvas tiled map with tiles which have other than squared edges?
1
Proper indoor lighting without directional light
2
HTML canvas how to create big game world and show only a part of it on canvas?