Beginner: How do I calculate a vector?

Given all this, how do I essentially, calculate a vector of their proposed motion?

I'd assume my vector is a 45deg angle from current to proposed...?

Here is a picture of what the walls can look like in the game. The red box being the hit box as discussed above. The character is bound inside the blue polygon (which represents outer walls). Black being inner walls. The way I was doing glancing was overlaying 4x4 tiles across this entire map and then for each tile that the character should glance on I would choose an incoming direction (i.e. DownLeft) and then redirect them to a different direction (i.e. Down) which should make the proposed hit box in a valid position. This is however very tedious as I have to create glances for multiple directions for every tile. I'm looking for hopefully a better way. 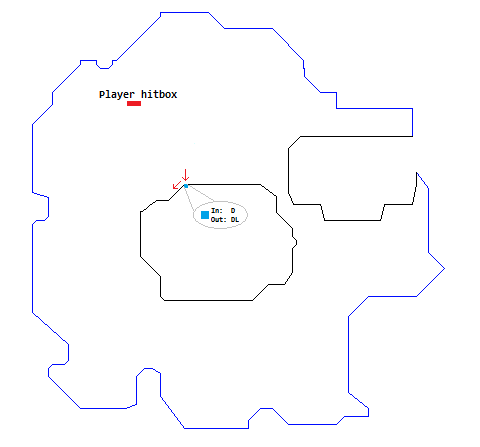 I was reading that you could add vectors to each tile but I'm not sure how this works because on some tiles a incoming direction does not always have the same out direction.

You're on the right track. I would start by determining the player's direction based on the keyboard state:

Then, multiply by the player's speed to get the velocity vector (or motion vector, as you say):

So, the proposed location is

As you say, if the proposed location is valid, it becomes the current location. If not, the easiest thing to do is to not move the player at all. But you probably want the player to slide against walls...

If your walls are not axis-aligned, sliding becomes somewhat more complex. We first need to determine which wall the player is facing. Now, we can think of the velocity vector as having two components: one which points into the wall, and one which moves sideways along the wall. We need to remove the component which points into the wall, so that we're left with a "sideways" motion vector.

The velocity component which points into the wall is the velocity vector's projection onto the wall's normal vector. We can compute this as

where v is the velocity vector and n is the wall's normal vector. If n is already normalized, this simplifies to

Now, subtract this from the original velocity to get the "sideways" component of velocity, which we can add to our location without running into the current wall. We should still check that this new proposed location is valid before accepting it, in case we run into a different wall.

I put together a JSFiddle to demonstrate. The logic for sliding against walls is in updatePosition.

Not the answer you're looking for? Browse other questions tagged 2d movement vector rpg or ask your own question.

26
Top Down RPG Movement w/ Correction?
3
Moving sprite from one vector to the other
7
How to move an object along a vector
2
Get a random vector
1
How to tell right from left: Finding the vector pointing towards the right side of a character?
3
Why does player still leave map?
2
How do I calculate the position of a vehicle moving between tiles, over time?
3
How can I make players move diagonally at equal speeds?
1
2d diagonally velocity greater than straight-line velocity. How to fix?