I came across a code that I guess is doing a pendulum camera, that's the class name. I would like to know the math behind that. I would like also to know how to decipher those stuff in game math, what are your recommendations ? I already own the book 3D Math for computer graphics by lengyel, but those stuff are not explained there.

The three component vectors right, up, and forward probably point along the axes x, y, and z relative to the camera. So by adding these vectors together you can compose any other vector. It works the same as if you built a vector by specifying its three elements individually, except that you are adding three vectors which each have one non-zero element. Normlizing that sum guarantees that the total length of the sum is a vector of length 1.

If Time.deltatime is the time since last update then, except for small variations, dir will be not vary from frame to frame. It's essentially taking the sine and cosine of constant values, which yields a constant camera direction. If that time value were accumulated rather than constant, then this would yield a circular motion of the camera. On the x-y plane, the x and y coordinates could be specified by taking the sine and cosine of a single angle. Your code sample appears to be doing that, using Time.deltatime as its angle (but I think it's doing it wrongly, as it's essentially constant each frame).

This picture is loosely related, please ignore the complex part; I was just trying to find an animation of the unit circle.

He's trying to oscillate between V and V+U*0.01+R*0.1, I think. If you want to visualize, it is trying to do something like the picture below: 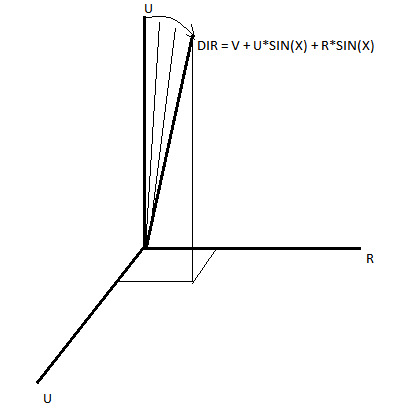 The arrow at the top represents the path DIR will take as time proceeds and it will go back to V when the sin value becomes zero. The summation, just adds the 'perturb' effect to the DIR vector, so that it doesn't always end up as V.

Not the answer you're looking for? Browse other questions tagged unity mathematics vector quaternion or ask your own question.

9
Raycasting tutorial / vector math question
5
Understanding math used to determine if vector is clockwise / counterclockwise from your vector
0
Lerp vs Vector math: one better than the other?
5
Vector Math question
0
2D vector to Quaternion
1
Explaining vector problem
4
Movement with Vector Math
3
Vector math to calculate the rotation and drift of a tectonic plate?
0
Math: determining a proper procedural vector for sine-movement