I had previously asked this for 3D but now I changed my strategy and would like to do the intersection in 2D.

The Rectangle is axis aligned and will always be in a fixed position, and has a constant shape and size, basically I want to clip the red areas of the triangles that extend outside the bounds of the rectangle. The triangles could be in any position, shape or size, I my code I have a loop where I check the triangles one by one, however I am still clueless about the math.

I have identified 5 cases of triangle rectangle intersection as shown here. 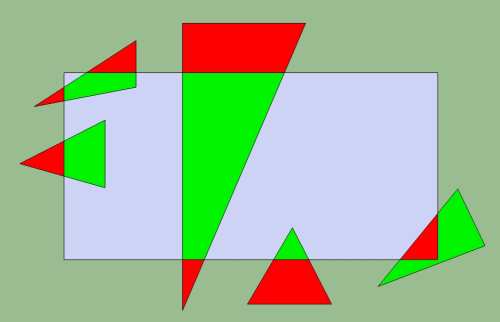 How do I find the intersection points of the triangle and the rectangle?

I think CGAL i too robust for such simple task. And Sutherland Hodgman clipping is usefull, when you have general polygon. But you have axis aligned box and you should make use of it.

First case: Triangle and box are intersecting. You can figure it out by line-line intersection test (for example this: http://mathworld.wolfram.com/Line-LineIntersection.html but you can google it in many ways - also look at EDIT2 at the end of this answer). You make line from every edge of box and every edge of triangle. Then you find intersection of all combinations (there are 12 cases <- 3 (triangle) x 4 (box) edges). 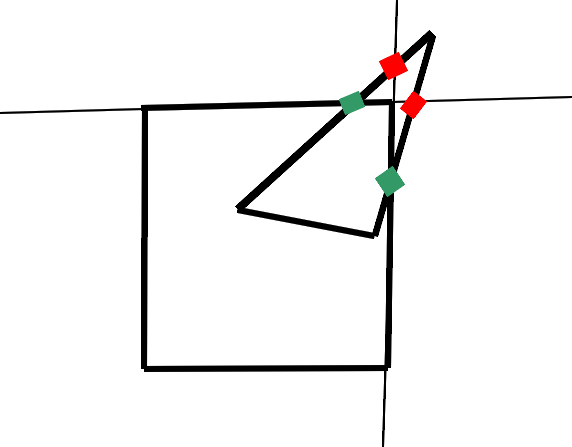 After this test, you should have several vertices, which define your new polygon created from triangle.

//EDIT: Oh. I forget, you have to take also every vertex from triangle for your new polygon, which lies in box (on picture there are two such vertices).

If no edge-edge intersection is found, you have to check two other cases:

I hope, this can work. It's not tested. Maybe you can use some heuristic and avoid of testing all possible edge-edge combinations.

You may find the answer to your question here on Stack Overflow.

They suggest using CGAL which is a C++ library for Geometric Algorithms. You could also use C++'s Boost.Geometry for a solution as well.

Not the answer you're looking for? Browse other questions tagged 2d intersection actionscript or ask your own question.