I've been trying to work on a space shooter with the idea of having enemies behaving like it is shown in this video : https://www.youtube.com/watch?v=3p7u8uCR6yw

In the video above, enemies fly from different portions outside the view area of the screen doing elaborate movement before finding a spot to form an organized formation.

I've been thinking of ways how this could all be done. One way is by having either the enemies and/or a manager use a Finite State Machine that will control when there is a "performing" state and when there is a "FindingSpot" state.

but at as far as implementing the complex patterns, I'm at a loss. Is there some sort of Math formulation that's used to generate those movement patterns?

If I understand, your question is about the building of the formation (arrival of the enemies from outside the screen into a "space-invaders like" formation (aka end-formation)).

Having played this game a lot, here is how I think they have done it:

To make it smoother, you may give each enemy a different exit point for the trajectories (that would be the index of the last point of the trajectory before going to its end-position). It may make the transition more natural. Also the diving enemies will leave the trajectory a lot earlier, and probably re-use the algorithm that guide missiles to the player ship.

Also, the end-formation is slowly moving horizontally. When the enemy will go in straight line from the end-point toward its end-position, you need to go to the position where the end-point will be at the time of arrival (aim in advance); or you may try to aim the current position of the end point; it could make the trajectory more natural, but you'll have to try to be sure.

Bottom-line: This method was common in the 80s. On today's hardware, you can probably model the trajectories as mathematical functions; that would allow you to have a smother movement, and less pre-computed data; also you may use some polynomial function instead of "straight line" for the last part of the arrival. The rest of the algorithm doesn't change (go to trajectory end-point, then go to your end-position)

EDIT: I forgot the last part of your question: I'm not sure there is a "simple" mathematical function for those trajectories, but you may obtain something close by stitching ellipses arcs together.

Here is an attempt to visualize it: 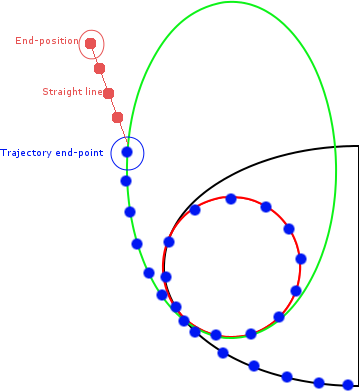 Here the trajectory is decomposed in 3 ellipse arcs (first the black, then the red and the green. The "Pinkish" part is the last part of the arrival (the straight line).

Not the answer you're looking for? Browse other questions tagged unity movement patterns or ask your own question.