I would like to know how to make this effect of merged circle selection. Here are images to illustrate: 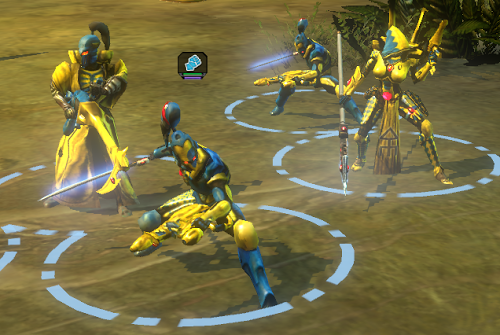 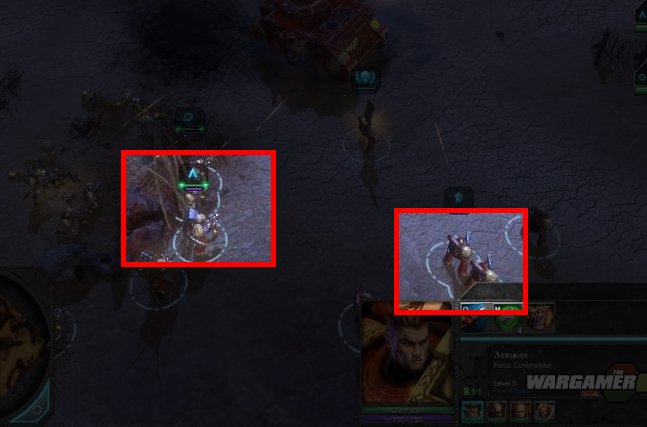 Basically I'm looking for this effect:

How the merge effect of the circles can be achieved ? I didn't found any explanation concerning this effect. I know that to project those texture I can develop a decal system but I don't know how to create the merging effect.

There are a few tricks you can do:

After you have rendered all other objects, for each unit render a transparent circle of smaller size with max Z value. Then render selection circles decals on the ground. Since they are below in Z-order, they will be discarded when under units.

Being fully transparent means that the circle gets written only to Z-buffer (max Z value). Now when you render decals, they are tested against Z buffer values, and if they are passing the test they get rendered (which happens only outside of the circles)

Same as with previous approach, but this time use a stencil buffer. Render smaller circles for units with some stencil value, then render selection decals. Setup stencil to discard any elements with your stencil value.

You could for example check in the decal rendering pixel shader if there is an intersection with any other decals and kill the pixel if so. It's quite efficient to do for this kind of circular decals.

Do you mean those blue circles on the ground?

There may be a smarter way to do this but consider my solution as an example how this can be done. Render your circles to a separate empty texture of the size of the screen. At this point you can blend them together, however you want. Depending on your needs you can write the full color or just the information that a circle is present at given pixel. However, you will definetely need a depth information for each pixel that you write if you want a Z-test effect.

When you render the terrain after the previous step, you can sample the previously created texture, using screen coordinates in pixel shader, as UVs. Now you know, that the circle should or shouldn't be projected at given pixel of the terrain. However, this way it will work as if the Z-test was disabled, so a terrain can't hide any circle. If you want a terrain to hide circles that are behind it, perform a depth test before blending a circle with terrain texture. You can use a small bias to enable rendering of circles that are just a little bit under the terrain but you would still like them to render.

Edit: Now in order to get the effect of merged circles what you need to do is: When rendering to the separate texture, you need to check if there is already a circle rendered where you are trying to render a new one. (Check if the texture has a value there) if so, erase this pixel. This should give the effect of "outline" when two or more circles overlap. For this to work correctly, however you will need to do this test only for the inside of the circle, not the border. So when rendering circles, write some specific value to the output texture, which indicates that it is a circle inside. Then you just need not to render anything on the circle inside and you should be good.

Edit2: For your simple red/green example: Before you render any pixel, check if this pixel is not already green. If it is, don't render. This will do the trick. In fact, while writing to the texture you can even use red/green for outside/inside of the circle, and then while rendering the terrain read those values and convert them to a desired color.

If my answer is too abstract by any chance, let me know.

There are a few options. As a general method, stencil buffers often come in very handy where certain drawing needs to be masked out, like the outline where the circles overlap in your example.

The only caveat is that you have to be careful about depth fighting. You can use a small offset to make sure that the outlines are in fact behind the interior, and get eliminated by the depth test. An alternative would be to use glPolygonOffset().

The sequence of drawing then looks like this, with delta being a small offset:

Off the top of my head, if these decals are drawn as discs, I would test each circle for intersection against each other circle, and put the intersection points into an array. Then draw arcs that are not inside an intersection. This is not a shader solution, though.

While the solution I have for drawing outlines over here is more than you need (as that shader turns every mesh edge into a full quad), it does follow this approach: drawing the original model to the stencil buffer, then rendering a larger version where the stencil buffer is still 0.

Not the answer you're looking for? Browse other questions tagged shaders selection .

-1
Create overlapping transparent images
0
Shader | Special Effect - Unit selection
4
How to "merge" multiple intersecting circles so that only the outer edges of each show?

1
How can I implement 2D cel shading in XNA?
6
Unit selection circle
0
Creating a fragment shader to darken a white texture over time - OpenGL GLSL
0
How can I have cutouts in a texture?
2
Unity: How do I only show parts of objects that overlap [2D]
5
How can I let players "scrape away" one texture to reveal another?