How do I randomly position objects without overlap?

I'm studying a little about procedurally generating levels and decided to start with a vertical scrolling game.

I would like to position some platforms vertically in my scene. So far, I've used a basic method: Random positions, with some maximum y-distance between them. However, that means platforms at the same height can still overlap. I would like to be able to have more than one platform at each height: 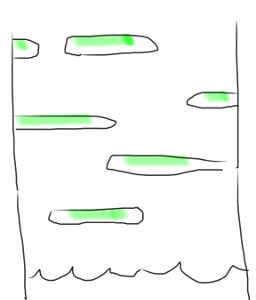 I thought about using sets of platforms including unique platforms, combined platforms (2 or 3 per y, and so on), and randomly position those sets. However, this would not prevent the overlapping and I really would like to do it properly procedurally.

Even so, I cannot guarantee that each platform is accessible by the player character from the previous one.

How can I proceed?

Before randomly placing the platforms you need to take into consideration some important values:

With that in mind you craft your platform generator floor by floor, starting by the ground floor and taking it as a platform.

There would be more rules and considerations (e.g. placing spikes), but those are what comes to mind right now for starters.

Note: I'm not taking into account the height of the platforms just to make the rules cleaner.

Take into consideration that depending on the approach rules addition, this could be a complex problem in terms of computational theory, making it CPU-intensive. In that case, it could be seen as a CSP problem, but this first approach look suitable because the computations are bond to same-level platform and two floors at the same time (current and previous).

Just like Mario said, the approach of making hand-crafted platform blocks is less CPU-intensive and making it easier to place random platforms in real time. However, the trade-off would be to invest time creating and tuning those platform blocks (considering the rules above).

Not the answer you're looking for? Browse other questions tagged procedural-generation platformer side-scroller or ask your own question.