I have created a gameobject(cube) and written code to move,mean while the processbar get loading.when the processbar is loaded fully then the object should stop moving.Can anybody please help me coding out. 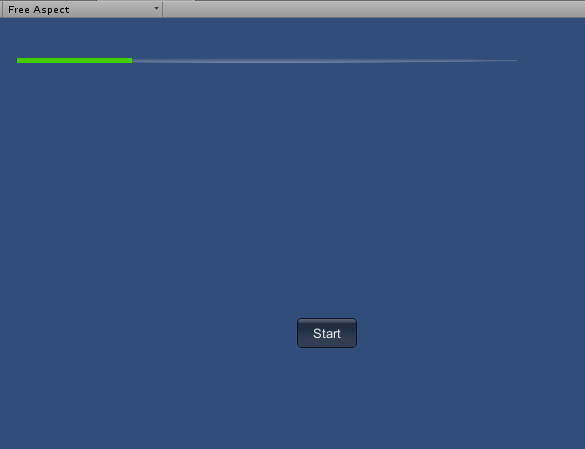 Suppose If I place a button,when I click the button the bar should get loading.For that I have written the code

but the progress bar is not getting loaded.What will be the problem

Well I'd like to comment on the question but I don't have 50 rep. Anyways: If we knew why you were doing this (specifically) then we might be able to help.

To know when to stop moving the object, you'll need a condition as such:

I hope this basic code can get you started using conditions in your code to check for happenings in your game.

(PS. If you want the cube's position to match the bar position, I'll leave that to you to figure out. Hint: it involves math, using the following pieces of information: the bars position and size, and the progress and maxProgress. Think percentages, and set the cube's position with your result.)

There are several possibilities.

If your cube is user-controlled, it probably has something along the line of

written either in your Update or your FixedUpdate.

Simply test the progress and the userinput like this:

This also works with a little bit of work for automated movement.

Bonus Code Review:
I seriously have no real idea what your doing in your OnMouseEnter().
It looks like you set your "BarFull"-Texture to the "BarEmpty"-Texture, which would result in the progressBar never again filling up visually, simply because the "BarFull"-Texture is gone. I can only assume that this is not what you want.

You will also have some kind of flickereffect at the beginning, because your progress is 100 at the beginning, but gets set to 0 (or maybe 0.05) in the first update. Depending of the execution order of Update() and OnGUI(), this can cause problems.

You use Clamp01() in OnGUI() to keep the value from getting to big, but your progress will get too big. If you pull the Clamp01() in the Update()-Function, it is better visable what you expect from the variable, allowing better understanding (also from your side) in the future.

You also have a definite time your ProgressBar will need to fill up, which is 20 Seconds. This can be of course the intended effect, but I would think a ProgressBar measures the progress of something like Fileloading, Items gathered or such. Maybe consider renaming it to TimeBar.

Not the answer you're looking for? Browse other questions tagged c# unity loading gameobject preload .