How can I trigger an event each time the rotation of my rigidbody2D is at a given value?

I would like to trigger an event each time my rigidbody2D is at a particular value.

The event should only be triggered once for each given value per complete object revolution. 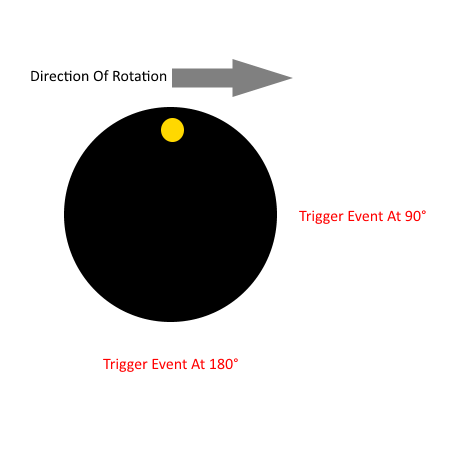 Initial attempts at achieving this have resulted in the following method which checks against an array of values, logging an event and incrementing an index when the value has been passed.

This suffers from a couple of issues:

Does anyone have any advice for approaching this problem and improving the above method?

This is somewhat long and might not work well if they are rotating faster than the deadzone value, but then you can just increase the deadzone. I've commented the below code: //declare new array of the dataclass we made below

Let me know if you have any questions or if it doesn't work as intended.

Not the answer you're looking for? Browse other questions tagged unity rotation rigid-body-dynamics or ask your own question.

1
Unity5 UI - How to trigger button click event while preventing menu item deselect event?
0
How can I change the parents rotation so the childs rotation is looking at a specific direction
1
How to make a 90 degree rotation happen over time
2
Unity c#: How to slow down rotation over time?
1
How to completely stop the camera from clipping into the ground
0
how can i set the y rotation of an object equal to another objects y rotation without rotating it on all the rest of the axis
0
Trigger an event only if two colliders fully cover each other