How do I convert from the global coordinate space to a local space? 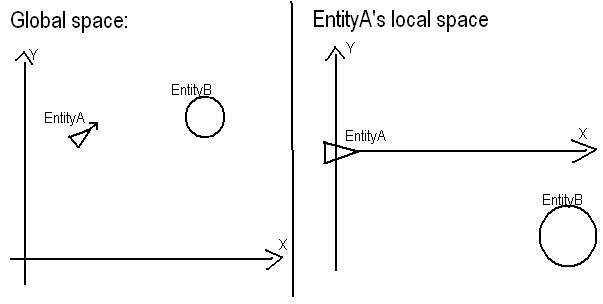 Given their global coordinates, how do I find the position of another entity in EntityA's local space?

Okay, so Assuming that you know what the World Transformation matrix for that object A is, You just need to construct the inverse of that matrix and you will have what you need.

Suppose the rotation, scaling and translation matrices of object A used to get it to Global Space are R, S and T respectively. You will multiply these together like

Now, take W and find its inverse W^-1 somehow. The inverse of a matrix is that matrix which does just the opposite. The product of the matrix with its inverse is always the identity matrix.

Now Apply this inverse matrix as the world transformation to the scene and each object will be in the coordinates you wanted.

For matrix multiplication, see This page. For Identity matrix, see this.

Here's another page which gives you the matrices you would need to make W.

I've done this with trigonometry rather than matrixes in the past (I am a matrix noob). Ashes999's answer is halfway there, get the relative vector, then rotate that by the inverse of EntityA's angle.

Let me try to give you something somewhere between The Light Spark's answer and Elliot's answer, because from what I read, you're really looking for an algorithm to follow and not just math tossed at you.

1.1) The heading also needs to be moved. This is a actually very easy to do, because the y-intercept in local-to-A terms is always 0, and the slope won't change, so we have y = 2 * x as the heading.

2) Now we need to align the prior heading to the X axis. So, how do we do this? The easiest way, conceptually to do this is to convert from x, y co-ordinates to a polar co-ordinate system. Polar co-ordinate system involves R, the distance to a location, and phi, an angle of rotation from the x-axis. R is defined as sqrt(x^2 + y^2) and phi is defined as atan(y / x). Most computer languages these days go ahead and define a atan2(y, x) function which does the exact same thing as atan(y/x) but does so in such a way that the output tends to be from -180 degrees to 180 degrees rather than 0 degrees to 360 degrees, but either work.

Similarly, the heading now changes. This is a bit tricky to explain, but it because the heading, by definition, always passes through our origin A, we don't need to be worried about the R component. Headings are always going to be in the form of phi = C where C is a constant. In this case, phi = atan(2 * x / x) = atan(2) = 63.435 degrees.

Now, we can rotate the system to move the heading to the X-axis of the local-to-A system. Much like when we moved A to the origin of the system, all we have to do is subtract the phi of the heading from all phi values in the system. So the phi of B becomes 53.13 - 63.435 = -10.305 degrees.

Hopefully that helps, and is light enough on the math for you to follow.

To put it simply entity B would need a reference to entity A. You'd then need to get the difference between entity's A position and entity B's position.

Not the answer you're looking for? Browse other questions tagged 2d mathematics coordinates .

2
Why isn't my world coordinate mapping back to the proper local coordinate?
14
How to extract euler angles from transformation matrix?
3
How do you use the distributive law with Quaternions and vectors?
1
Convert global 3d coordinate system to a local one with specific direction
0
Cylindrical billboarding around an arbitrary axis in geometry shader
1
How do game engines enforce global, engine-specific coordinate systems?
0
Calculate the coordinates of an offset in 3D space knowing the initial rotation and final rotation of the object