I am trying to set up a simple bow and arrow game. When the arrow hits the enemy body, the arrow's body is deleted and the arrow sprite continues to update, keeping the position correct in relation to the enemy it hit. Picture an arrow sticking into a body and that body still rotating and moving. My problem is that the rotation is completely wrong when the enemy rotates. I know how to do this in 3d with matrix transformation but I can't seem to figure it out in 2d with Cocos.

Here is my method.

When they rotate, they rotate about their respective anchors and I am wondering if I need to set the anchor of the arrow to the center of the sprite. Does anyone know of an easy way to do this. If not, I will try to create an algorithm where the anchor is set to the offset divided by the width and height of the sprite image hopefully giving me the correct anchor values.

Then I assume I need to reposition the sprite.

Does anyone have a simpler way to do this?

I think you could accomplish this by applying the following algorithm (shown in pseudocode):

arrowPointOfContact and enemyCenter represent the point of contact of the arrow on the enemy and the enemy's center of rotation, respectively.

Before any rotation is done, we have: 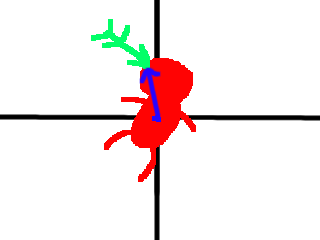 where the blue arrow represents the start vector.

After performing all rotations as listed in the algorithm (in this case it is a 90 degree rotation, but it will work for any) we have: 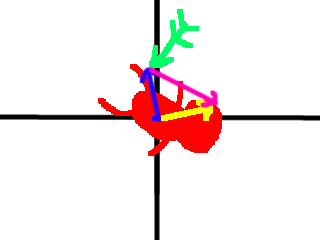 where the yellow arrow represents the destination vector, and the magenta arrow is our destination - start vector, which the green arrow sprite must be translated by to get to its final position.

1
Box2d - Attaching a fired arrow to a moving enemy

7
How do I adjust the origin of rotation for a group of sprites?
13
How can I move a sprite in the direction it is facing?
5
How do I support animation with frames of different sizes?
1
how to re-use a sprite in cocos2d-x
1
Box2d - Attaching a fired arrow to a moving enemy
0
Rotate sprite direction Cocos2d
3
Java Libgdx Attaching Sprite to Box2D Body
0
How to rotate parent and all children by center pivot?