How can I find the tangent and normal at an interpolated point on a Catmull-Rom/Hermite spline?

I have an implementation of a simple Catmull-Rom spline. It works, but I'm trying my hardest to be able to place vertices at extrusions along the curve. For this I need the normal (and tangent in the process) to be able to find the correct locations off of the curve. I cannot find any information anywhere, at least nothing that I can understand, on how to quickly calculate the tangent for a given t value on the curve. I've tried to do the derivative myself but I quickly realized I had no idea what I was doing.

How can I find the derivative/tangent/normal for a point at a t value on a Catmull-Rom spline?

Just to be extra clear, here is an incredibly rough picture of what I need.

I need to sample a point at a location along the curve and find an orthogonal vector, represented here by the blue lines. At the end of the blue lines I will place vertices. I have a working implementation of this already but it is for a bezier curve.

OK, I continued fiddling with it and I went ahead and just tried to do the math.

This is the equation I am using for the interpolation between two points:

p0 and p1 are the control points and m0 and m1 are their respective tangents calculated elsewhere.

Previously I said I had no idea what I was doing with the math, but that was only because the derivative route felt too easy, so I figured I must have been doing something wrong. I went ahead and tried it and implemented it anyway. This is the formula that results:

And wouldn't you know it works! Using this will give you the tangent vector at any interpolated t value on the curve.

From here the conversion to a normal is simple. In my case I'm in 3D and I don't need any special rotation, so I just have to do Vector3.Cross(Vector3.up, tangent), and that gives a vector in a direction orthogonal to the curve on the x/z plane (in Unity).

Here's a visual to show what I was trying to achieve.

You can find some rudimentary source code here. 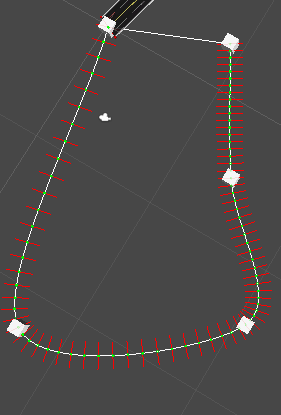 Not the answer you're looking for? Browse other questions tagged mathematics splines or ask your own question.

8
Rotating a vector by another vector in shader
21
Determine arc-length of a Catmull-Rom spline to move at a constant speed
1
Interpolation between two 3D points?
1
Find the nearest control points either side of a Catmull Rom spline segment
5
Catmull Rom Spline - Constant Speed
4
Controlling roll rotation when travelling along bezier curves
0
Spline type to achieve a specific result
3
Improve velocity obstacle calculation algorithm/performance