How can I find the “end” vertices on an open-ended mesh?

I was looking at a video of a system that extrudes meshes along a curve, connecting them end to end but adjusting the vertices for a smooth connection. It does this with a mesh that as far as I know is guaranteed to have open ends that are later capped with a separate mesh.

Here is a video showing the effect I am trying to reproduce.

Let's suppose I have a mesh, then, that is open like in the picture below. How can I find the vertices that are on one edge only of this mesh? For example the ones that are selected here. 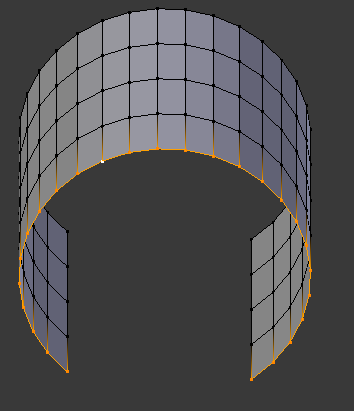 Previously I used a plain cylinder with open caps as an example, and finding edges that were only used for one face might have been able to do the job, but in a case like this, it would end up selecting any vertices in the middle along the bottom as well, which I don't want.

I want to be able to find the ends of a particular side like those that are selected in the picture. Theoretically I can then manipulate these into new positions if I wanted to, for example, string cylindrical segments into a curved cable structure.

For what it's worth, I'm trying to accomplish this in Unity with C#, but it's the algorithm I need help with.

You need more info about your mesh geometry and topology than you currently have, otherwise you will need to do alot of tests. Half edge data structure which gives you a directional edge info, can give you this information easily. Boundary half-edges and hence vertices don't have adjacent faces, so you simply check if a half-edge has an adjacent face, if not, it is a boundary edge and hence its vertices.

Based on your picture, you appear to want to know the vertices that are not fully enclosed in a group of faces.

If kat0r's answer suffices, go with that.

Otherwise, you need to look for vertices that either:

One way of doing that would be to sort all the edges for a vertex based on angle, then check if there is a face for every edge and it's neighbour.

Not the answer you're looking for? Browse other questions tagged unity procedural-generation 3d-meshes vertex or ask your own question.

0
Is it only possible to display 64k vertices on the monitor with 16bit?
5
How check if an arbitrary given mesh is a single closed mesh?
7
How can I create or extrude a mesh along a spline?
2
Unity: how highlight effect should be applied to terrain mesh
1
How can I rotate a cylinder so the top points at specific transform?
0
How Can I Separate a Mesh Into Two Separate Objects Without Corrupting UV Data?
0
Nav Mesh Agents are not moving along the mesh