Using sky for indirect lighting - should I remove the sun?

When rendering an object, I first calculate the direct lighting contribution using standard phong diffuse and specular shading from each light source. In outdoor scenes, this is usually a directional light used to model light from the sun.

I then add in the indirect diffuse lighting contribution by sampling a high mip level of the sky cubemap at the normal to the surface. However, it recently occurred to me that, since my sky cubemaps contain the sun, I am actually including the contribution from the sun twice! I'm introducing a directional light to model the sun in the direct lighting stage, then introducing further lighting from the skybox itself.

My question is this: Should I modify my sky cubemaps so that they don't include the sun, or should I just remove the directional light instead?

MooseBoys is right when he says

integrate the hemisphere about the normal

And to some extend you are also right when you say that a low mipmap is doing that, but not 100% mathematically correct.

Now, iI'm not saying it will give completely different results, its a good way to approximate the physically accurate model, with hardware support and ease of implementation ! You can keep it this way if you want. If you want super crazy physically correct precision, then I suggest you download AMD CubeMapGen modified by Sebastien Lagarde, and check the GUI box "irradiance", then you can export the result as .dds and instead of sampling the mipmap you can sample the irradiance map.

Now, you need to take the Sun OFF your skycube before you generate the irradiance map, because you WILL, like you feared, apply the sun 2 times !
To do that, just down-tone the sun corolla area to a brightness that has similar values with the surrounding (e.g. manually with Gimp). Its enough. Physically speaking, a sun as a directional light should get values of about 20/25, with an exposure of 1, it would simply saturate everything in an SDR renderer. If you have a range-compressor tonemapper you could get away with this kind of values. If you have an SDR renderer, you want to pre-tone-map manually the intensity of your directional light, to something near 1 so that you don't saturate things. But in that case, the contribution from your irradiance map will be unusually high, it would make sense to premultiply it with the same down-tone filter after its baked by cubemapgen. (again, in a full HDR pipeline, you care not about those things, its handled in real time).

EDIT: Here is the values we find in a classic HDR sky map: 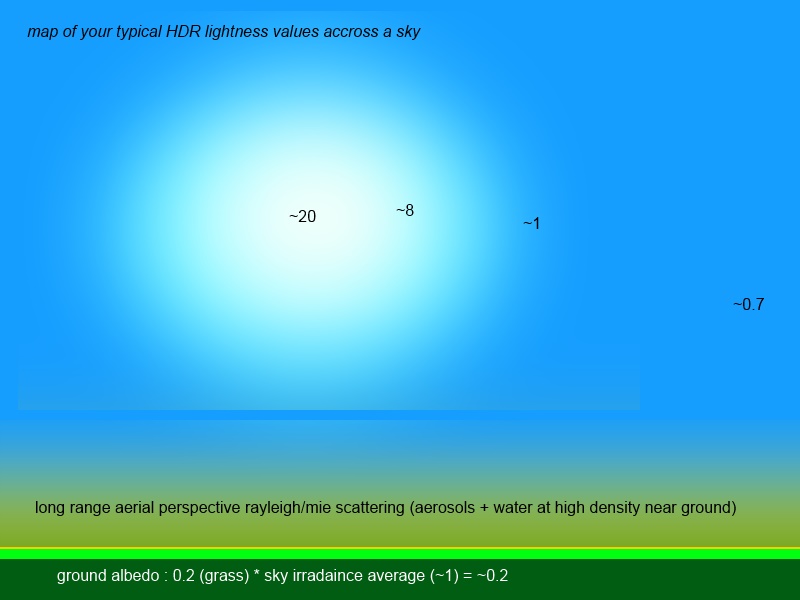 Not the answer you're looking for? Browse other questions tagged directx lighting sky skybox or ask your own question.

5
How to skip the sky in lighting shaders?
3
Directional light shader not behaving as expected
23
Does HDR rendering have any benefits if bloom won't be applied?
1
Unity — custom shader behaves differently on WebGL deployment (correct) and editor view (incorrect)
2
PBR How to correcly use standard lighting and IBL
3
Physically based shading - ambient/indirect lighting
0
Specular light for DirectX11
0
Opengl the light position always on the origin point therefore the diffuse and specular does not work