How to implement a simple bullet trajectory

I searched and searched and although it's a fair simple question, I don't find the proper answer but general ideas (which I already have).

I have a top-down game and I want to implement a gun which shoots bullets that follow a simple path (no physics nor change of trajectory, just go from A to B thing). 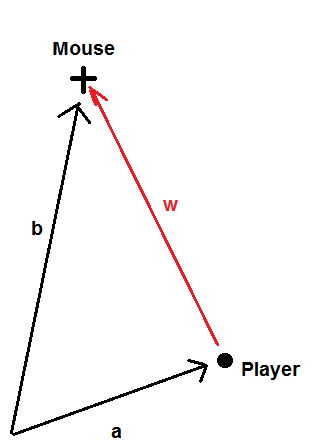 I have the constructor:

And here I update the position and draw the shot:

Now, the behavior of the bullet seems very awkward, not going exactly where my mouse is (it's like the mouse is 30px off) and with a random speed. I know I probably need to open the old algebra book from college but I'd like somebody says if I'm in the right direction (or points me to it); if it's a calculation problem, a code problem or both. Also, is it possible that Gdx.input.getX() gives me non-precise position? Because when I draw the cross-hair it also draws off the cursor position.

Sorry for the long post and sorry if it's a very basic question. Thanks!

Then you can use that angle to update bullet position:

I use the same calculation and I don't have the same issue, perhaps the error is with the Gdx.input.getX(). I am not familiar with libgdx, so I can't comment directly on this. Maybe you can test this by shooting at an exact known location. One suggestion would be to color a pixel at say (300, 300), and shoot directly on it then check what the mouseX, and mouseY values.

I like how you calculate the trajectory separate from the draw since this operation only needs to be done once. One tip, the result of any number squared will never be negative so there is no need to use Math.abs().

One more suggestion, if you are using a pointy image, like an arrow, as opposed to something round, like a fireball, you can rotate the image to match the trajectory. I took the liberty of rewriting something things for clarity of intent. You can generate a rotation angle and then rotate the sprite with this value.

Not the answer you're looking for? Browse other questions tagged libgdx bullet-physics linear-algebra .