Assigning valid moves on board game

I am making a board game in unity 4.3 2d similar to checkers. I have added an empty object to all the points where player can move and added a box collider to each empty object.I attached a click to move script to each player token. Now I want to assign valid moves. e.g. as shown in picture... Players can only move on vertex of each square.Player can only move to adjacent vertex.Thus it can only move from red spot to yellow and cannot move to blue spot.There is another condition which is : if there is the token of another player at the yellow spot then the player cannot move to that spot. Instead it will have to go from red to green spot. How can I find the valid moves of the player by scripting. 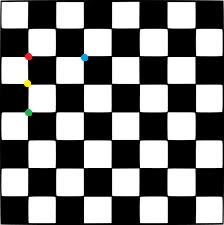 Browse other questions tagged unity unityscript board-game or ask your own question.

4
How do I calculate legal moves in a travelling board game?
1
Board Game Pathfinding - Finding optimum valid path with limited path distance?
0
Unity - Permanent force when a rigibody without gravity hit a collider
3
How to find the possible directions to move next?
0
Why RaycastAll misses some objects?
3
How to completely stop the camera from clipping into the ground
0
Minimax not blocking moves on board game