How are game characters animated? [closed]

I will be working with my friends on our final year project. Our game will be FPS and I have to draw some animations for FPS view and other enemy character that can be programmed easily to make a good game.

I would like to know how game characters are made that are movable? What kind of software and engines are used for these characters? 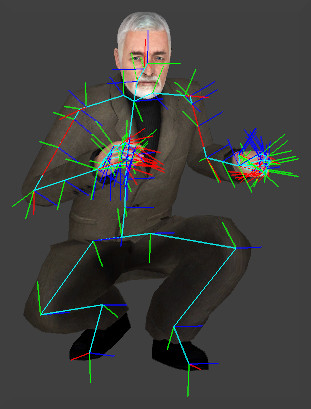 Each 3d model has an invisible bone structure (the red and teal lines in the image above). Each polygon of the model is connected to a bone. When you define a motion sequence, you define it as a sequence of rotations of the bones around their connections to other bones. When a bone moves, the polygons connected to it move with it. This allows to define motion sequences without having to change the position of every single polygon. When multiple characters share the same bone structure, they can also share the same animations, so you don't have to recreate each animation for each character (although you might want to make some animations different for characters of different genders, personality types and levels of physical fitness).

Most 3d modeling software supports skeletal animation and have export-formats which are readable by widely used 3d engines. Please do not ask for product recommendations here, because they are off-topic.

However, letting an artist create animations from scratch doesn't always lead to the best results. It's hard to recreate all the subtle nuances of human body-language from memory, so the results often look robotic and unnatural. That's why larger game studios which have the resources for it use a process called Motion Capturing.

Human actors are hired to enact the actions of the game characters. The actors wear special suits during the performance which have highly visible marks attached to them. When they are recorded by a video camera during the enactment, the movement of these marks can be mapped to the bones of the character 3d models. That way the movements of the actors can then be applied to any 3d model which uses the same bone structure. This method usually leads to much more naturally-looking results and when there is a large number of animations to create, it can also be a huge time-saver. 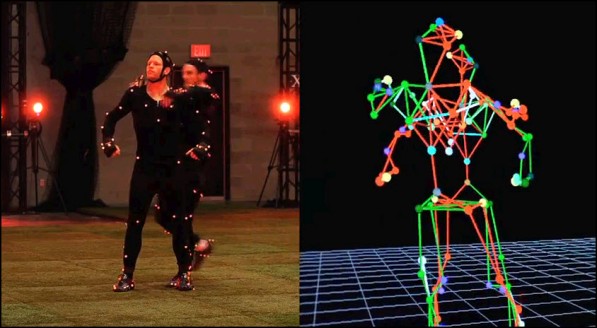 However, the cost for the equipment needed for motion capturing will likely far exceed your budget, so you will have to resort to defining skeletal animations manually in a 3d modeling program.

Actually, the answer by Philipp is quite good, but misses an important point.

Some games (Quake/Q2 being the most notable examples) didn't use any skeletal animation at all - they instead resorted to vertex animation (ie. animating the position of vertices in the mesh). It's actually a lot simpler to support in code, although for big projects this usually don't hold true (but still, many games were made that way*.

Also, this was the default way of defining animations in Flash, 3D Studio and 3DSmax in the days of old (although it stopped being that way after the implementation of skeletal animations for them). I think that for simple games, frame-based interpolation of vertices is still the easiest (in terms of both code and modelling effort) way to get started.

Philipp's answer is correct, but it's worth adding that there are (relatively) low cost markerless motion capturing solutions that utilize sensors commonly found at home, such as an array of webcams, Microsoft Kinect sensors or Sony PS Eyes. They usually don't output production-quality animations (you can expect mediocre precision and jitter in most cases), but you'll have the timing right and if you're willing to do some cleanup and some fine-tuning, it'll save you a lot of time compared to manually animating the skeleton (or the mesh directly).

Additionally, there's Mixamo, a service that sells ready-made animations for common skeletal meshes. If I recall correctly, they give an amount of animations for free, for evaluation purposes.

Not the answer you're looking for? Browse other questions tagged animation movement models character or ask your own question.

2
How do you handle animations that are for transitioning between states?
4
How to use rigid bodies for characters?
4
How are realistic 3D faces created and animated in video games?
3
What is the range of RAM consumption for the typical 3D character in a video game?
1
Which nodes of the Collada DAE are most relevant for game object/character use?
0
2D top down RPG animation architecture problem
1
Character implementation and architecture
2
How to achieve single animation for different charcters?
6
How to store relations between NPCs?