I want to optimize my colliders geometry, at the moment is composed by boxes (it's a tile based game) of the same dimensions, i want to remove the inner vertices to have, at the end, only the shell. Does anyone knows or can point me out to the right direction/algorithm? The only way I can think about it's some kind of region growing with coordinates updating in a recursive way. 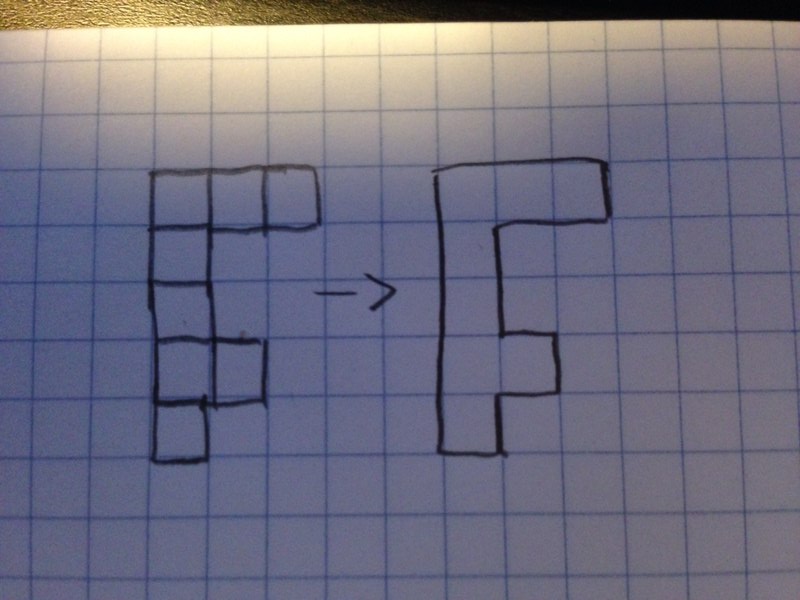 Since you're using a tile based game this may not be necessary at all. In general a tile is just an array of values. Each value can represent a different type of geometry to collide with, and in your case it looks like (judging by the picture) you only have AABBs of uniform size. If this is the case then you shouldn't have any floating point vertices at all! Collision with the grid involves truncating a floating point coordinate to see which grid cell it lays within.

This section only applies if you actually create individual AABBs from your tiles.

Since you're using a grid like this you can definitely create an algorithm to join multiple cells into a single AABB. The idea would be to, as a pre-processing step, use a simple algorithm in the likes of flood filling to find the biggest AABB you can that groups a lot of tiles together. Since this would be a pre-processing step and does not actually run in your release code, it can be a pretty naive algorithm and you move on to develop other interesting features of your game:

If you're familiar with with the idea of a searching a graph with a depth first search (DFS), the idea could be to search all possible expansions for each grid cell and choose the one that eats up the most volume at any given step.

What you'd be implementing here is a type of approximate convex decomposition, and this topic can get very involved. Since you're only dealing with AABBs you can make very simple algorithms that get the job done, but if you want to you can do something more complicated... But I don't recommend this.

Not the answer you're looking for? Browse other questions tagged 2d tiles optimization vertex or ask your own question.

4
Collision with tile corners/seams in 2D platformer
14
Fastest way to render lines with AA, varying thickness in DirectX
2
Split up a screen into regions
0
How can I optimize performance when updating tiles?
2
How to “piece together” an image in code, to render later?
1
Optimization for lots of UV coordinates update for tilemap animation
1
2D grid based game merging boxes
2
Pathfinding: longest route along tiles of same type
0
How to render a large tile-based 2D world efficiently (using JavaFX/ScalaFX or more generally)
0
Algorithm for finding edge vertex points on a tilemap