How to implement soft edge areas with particles

My game is created using Phaser, but the question itself is engine-agnostic.

In my game I have several environments, essentially polygonal areas that player characters can move into and be affected by. For example ice, fire, poison etc' The graphic element of these areas is the color filled polygon area itself, and particles of the suitable type (in this example ice shards). This is how I'm currently implementing this - with a polygon mask covering a tilesprite with the particle pattern:

The hard edge looks bad. I'd like to improve by doing two things: 1. Making the polygon fill area to have a soft edge, and blend into the background. 2. Have some of the shards go out of the polygon area, so that they are not cut in the middle and the area doesn't have a straight line 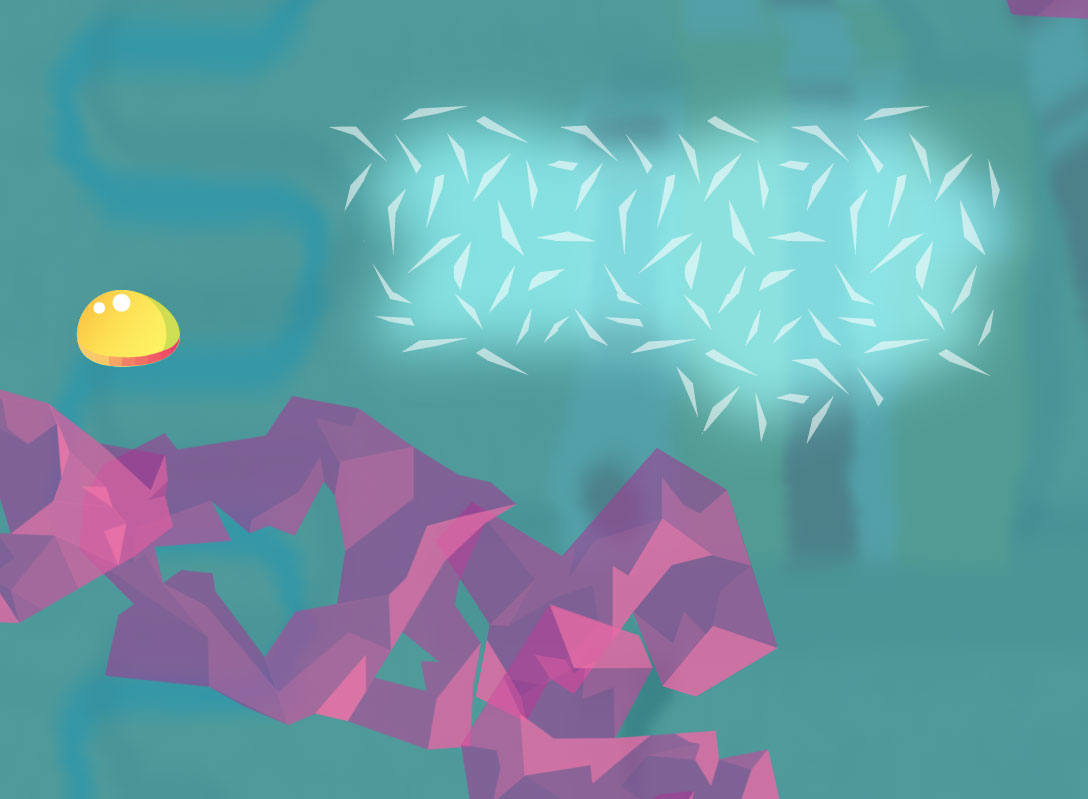 I think 1 can be achieved with blurring the polygon, but I'm not sure how to go about with 2.

How would you go about implementing this?

1.If you want something that's close to your mockup I'd use particles (It doesn't have to be a fully blown particle system).

You can try to put the triangles directly onto the particle texture and see how this works out. Otherwise render them on top of your "particle soup" as a separate layer. 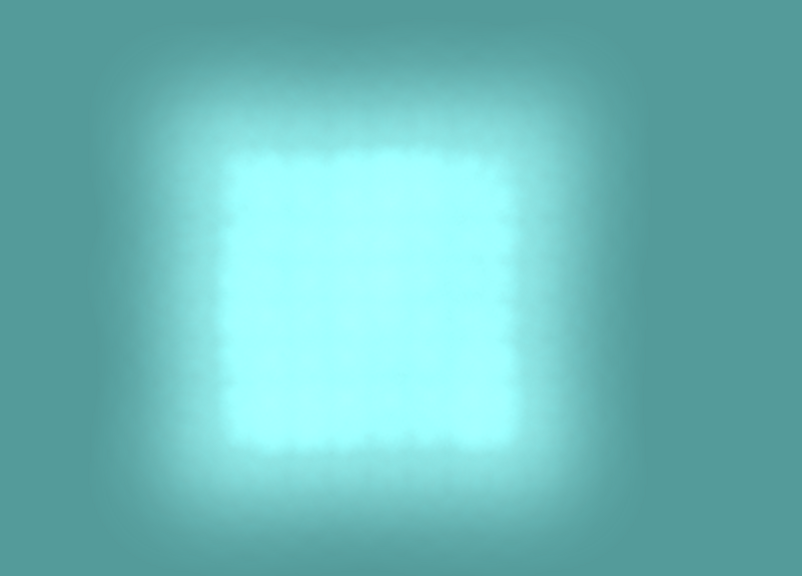 You can find the updated demo here

The formula to calculate a particles velocity would be something like this:

To calculate the position of the particle you put this in your update method:

This should give you a "fluid" where each particle swings around its origin when the player stirs the fluid. The springConstant changes how much a particle swings away from its origin and the dampingFactor how fast the particle comes to rest. You may have to tweak the code since its the modified version of a 1d simulation I use in my game.

Now with a demo: Demo Just tweak the 3 constants at the top until the fluid behaves like you want it to.

My thoughts about these two points:

The idea i had when reading your post was this one :
• build a set of tiles that you'll use for your areas.
• render the area polygon on a small temporary canvas at the tile resolution (ex : if tiles are 16X16, render at a (16X,16X) lower resolution).
• use that temporary canvas to decide wether to render tiles or not on the main canvas :
if a point is set on the low-res canvas, draw a 'random' tile on the main canvas. if a point is just a neighbor of a set point, draw a 'random' tile at a lower opacity (to make transition) on the main canvas.

I was afraid that lowering resolution would create a block effect, but even with 20X20 tiles, it looks quite good : 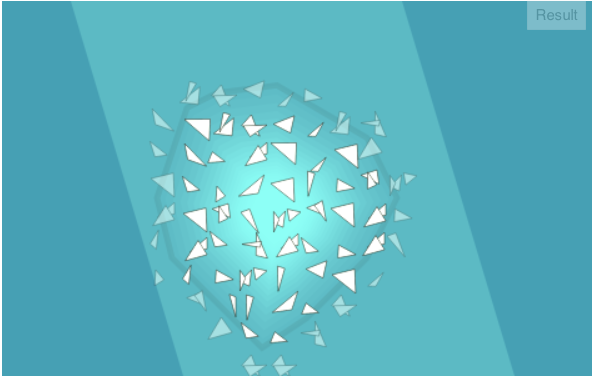 Steps for this are : take your polygon : 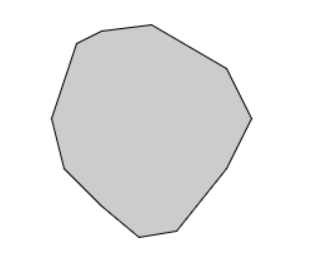 Draw the polygon at your tile resolution :

Then use the imageData of the low-resolution canvas to decide wether to draw a tile or note.
If a pixel is set on the low-res canvas, it means we should draw the tile : pick up a 'random' tile index to choose which tile to draw. That random index should always be the same for a given area/tile.
If a point is empty but next to a filled point, also draw a tile, but with half opacity. 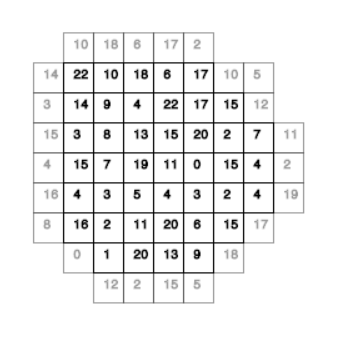 So let's draw the tiles : 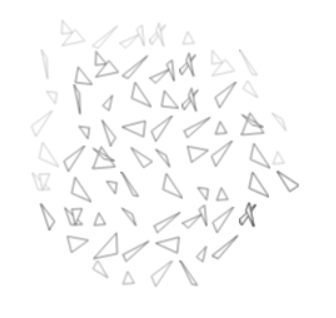 For the polygon i just draw several times the polygon, scaling it down, and increasing opacity on each draw (one might use the globalCompositeOperation 'lighter', also ). 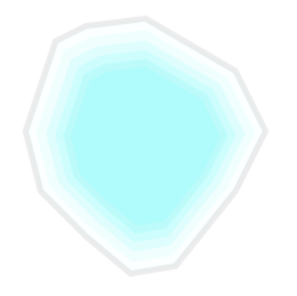 Once you add up everything, it gives : 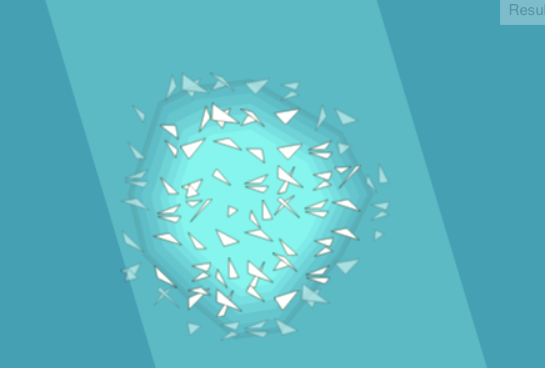 let me know if this helps.

In your tile, the "pieces" are about 80px wide at most. I would suggest, making 2 areas. You draw your original polygon, and you make a mockup of it about 80 pixels out from each edge. You then draw your tiles into the bigger polygon.

This is very high level, but I figured I'd share it with you. There's a lot of detail to be determined here.

A crude image to demonstrate: 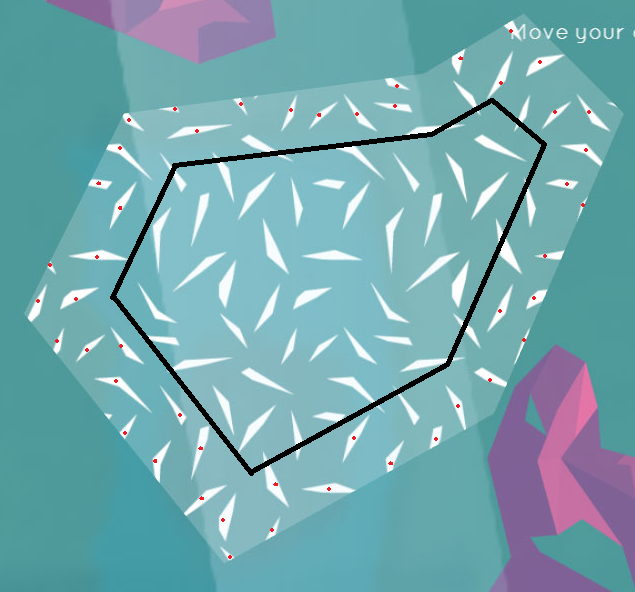 If the inner black polygon were the original, you would erase all of the polygons with a red dot.

Not the answer you're looking for? Browse other questions tagged 2d graphics particles phaser .

25
Mega Man-style screen scrolling design
3
How are done "snake" particles?
1
How to handle a negative coordinate 2d map with a growing map size
0
How to create soft Icecream like particles with Liquidfun and Corona
8
How can I implement an RPG-maker style
3
How to use 16/32 square pixel tiles in tilemap on arbitrarily sized canvas in Phaser
0
Implement Hearthstone disenchant extra cards particles
10
What are good algorithms to generate borders / state areas on 2d star maps?
1
2d side scroller slope physics and collisions
1
Procedurally create a polygonal shape filled with texture in unity 2d