I am calculating the model, view and projection matrices independently to be used in my shader as follows:

When I try to calculate my camera's view matrix the Z axis is flipped and my camera seems like it is looking backwards.

My program is written in C# using the OpenTK library. 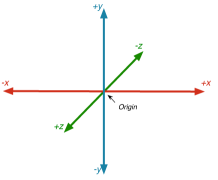 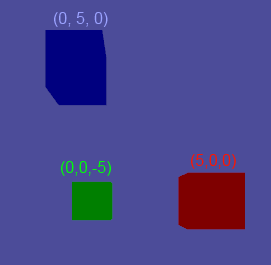 From my understanding of the OpenGL coordinate system they are positioned correctly.

The model matrix is created using:

The view matrix is created using:

This results in the following matrix being created:

I thought that because this is aligned with the OpenGL coordinate system is should produce no rotation. Is this the wrong way to calculate the rotation matrix?

I then create my view matrix as:

Rotation almost works now but the -Z/+Z axis has been flipped, with the green cube now appearing closer to the camera. It seems like the camera is looking backwards, especially if I move it around.

My goal is to store the position and orientation of all objects (including the camera) as:

Apologies for writing such a long question and thank you in advance. I've tried following tutorials/guides from many sites but I keep ending up with something wrong.

The problem is that constructing the matrix out of the right, up, and forward vectors inherently sets up coordinates in which X points right, Y points up, and Z points forward. The Z axis in this coordinate system points the opposite of the direction it's "supposed" to point (for right-handed view space, as seen in your first diagram).

To fix the problem, you just need to build the view matrix using the camera's right, up, and backward (negative forward) vectors instead.

Not the answer you're looking for? Browse other questions tagged opengl camera matrix opentk .

0
Conversion from matrix defining rotation and position to camera matrix
3
Can a 4x4 matrix describe a camera's perspective?
5
Panning with the OpenGL Camera / View Matrix
7
Matrix rotation wrong orientation LibGDX
0
Doing a turntable camera animation on a world matrix rather than view matrix
1
How do I create a view matrix that does not contain the camera translation?
0
How to calculate view matrix for OpenGL 3.+ 2D Camera Roll
0
Camera view matrix from position/yaw/pitch/worldUp
2
Drawing OpenGL camera frustum