How to optimize a box2d simulation in action game?

I'm working on an action game and i use box2d for physics. The game use a tiled map.

I have different types of body:

Actually i tested my game with ~150 bodies and i have a 60fps constantly on my computer but not on my mobile (android). The FPS drop as the number of body increase.

After having profiled the android application, i saw that the World.step took around 8ms in CPU time to execute.

Here are few things to note:

I also now that i can active/desactive or sleep/awake bodies.

Considering the fact that only a part of the enemies are possibly displayed on screen, is there any optimizations i can do to reduce the execution time of box2d simulation?

I found a guy trying an optimization based on distance of enemies from the player (link). But i seems like he just desactives far bodies (in my case, i could desactive bodies that are not visible). But my enemies need to move even when they are not visible on screen, and applying forces will not workd on inactive bodies. Should i play with sleeping bodies here?

Also, enemies are composed by two fixtures and are constantly colliding with each others and with tiles but i really never need to get notified about that. Is there anything i can do to optimize this kind of scenario?

Finally, am i wrong to try to run simulation at 60FPS on mobile and should i try to make it run at 30FPS?

Now that I think about it some more, there may be a way.

You say you are using a tile-based map, so you might consider implementing tile-based collision detection far away from the player. Consider the following diagram: 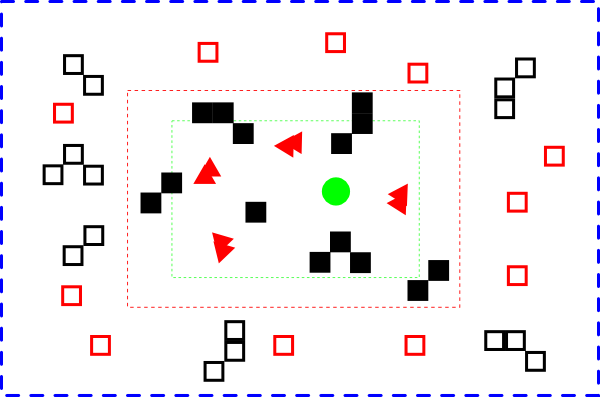 *I will refer to the space inside the blue box, but outside the red box as the tile-region.

The key here is to update your enemies in 2 ways: when they are inside the red box, update them as you normally do.

When they are outside the red box (b2body is inactive), update their position discretely. That is, allow them to move to the next tile after a set amount of time (in accordance with the speed they are allowed to move as a box2d body). If you want info on how to do the path-finding, check out these two answers.

If you are using a an ECS the implementation becomes much clearer: enemies in the tile region have a TileMove component. Which looks something like this:

You also need to be able to check if enemies are crossing the red box boundary and decide what to do with them.

Box2d to Tiled Region - On the box2d side, it's pretty easy. I would reccomend making a sensor body that is updated with the camera's position and orientation. The dimensions of the sensor body are the same as the red box. Whenever the endContact callback is triggered from the sensor, deactivate the b2body belonging to that entity, and create/restore a TileMove component.

Tiled Region to Box2d - Going the other way, you need to do your own area check to see if any of your tiled enemies have entered the red box. This is probably the trickiest bit. My gut feeling is that you should get the AABB of the red box, and query all the tiles (a rectangular sub-region of the global grid) to see if there is an enemy/obstacle that currently occupies each tile. For each entity found with a tileMove component, do a narrow phase test to see if it's actually inside the red box.

Alternatively, just make the red box the AABB that's centered with the green box, like in the figure below 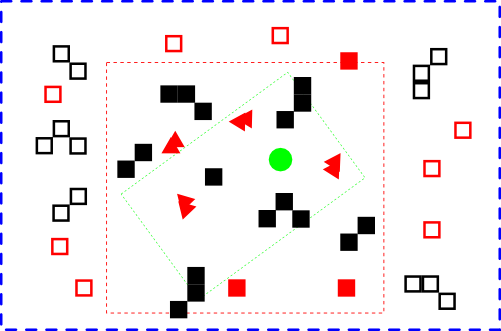 In this case there doesn't need to be a narrow phase; every occupied tile in the AABB region will activate its occupant. The drawback here is that there will need to be a few more active enemies than there would be otherwise.

In any case, once you have determined that an entity needs to move back into the box2d region you need to:

First, this means there is a whole other group of objects you have to maintain (the tile-entities). Also, you say you have ~150 bodies in the simulation. There's a lot of changes I've suggested, and the overhead cpu cost of determining when enemies/obstacles are inside/outside the box2d region (and transforming them appropriately) might not give the net performance gain you desire.

What I can say, is that, the more enemies you have in your game, the better this method will perform vs. the pure box2d implementation.

Finally, although I am somewhat uncertain as to the impact it will have on the overall performance, I am confident that this answers your core question: it will reduce the execution time of the box2d simulation.

Not the answer you're looking for? Browse other questions tagged box2d optimization .

2
Moving a big set of box2d bodies in an iOS endless side-scroller game (such as Canabalt)
1
Best way to have a body with 1 dimensional linear only movement in Box2D
4
Collision Filtering in Box2D
5
How to make Box2D bodies automatically return to a initial rotation
3
Using Box2D / Physics with Tiles?
0
Only render/calculate the chunks in frustum!
4
box2d rendering performance degrading extremely even with sleeping bodies?
1
Libgdx box2d crashing
0
Drawing the box2D rectangles
2
Box2D: How can I speed up a physics simulation with many, many overlapping box bodies?