I have written a simple 2d platform game for Android and am wondering how one deals with frame-skipping? Are there any alternatives? Let me explain further.

So, my game loop allows for the rendering to be skipped if game updates and rendering do not fit into my fixed time-slice (16.667ms). This allows my game to run at identically perceived speeds on different devices. And this works great, things do run at the same speed.

However, when the gameloop skips a render call for even one frame, the sprite glitches. And thinking about it, why wouldn't it? You're seeing a sprite move say, an average of 10 pixels every 1.6 seconds, then suddenly, there is a pause of 3.2ms, and the sprite then appears to jump 20 pixels. When this happens 3 or 4 times in close succession, the result is very ugly and not something I want in my game. 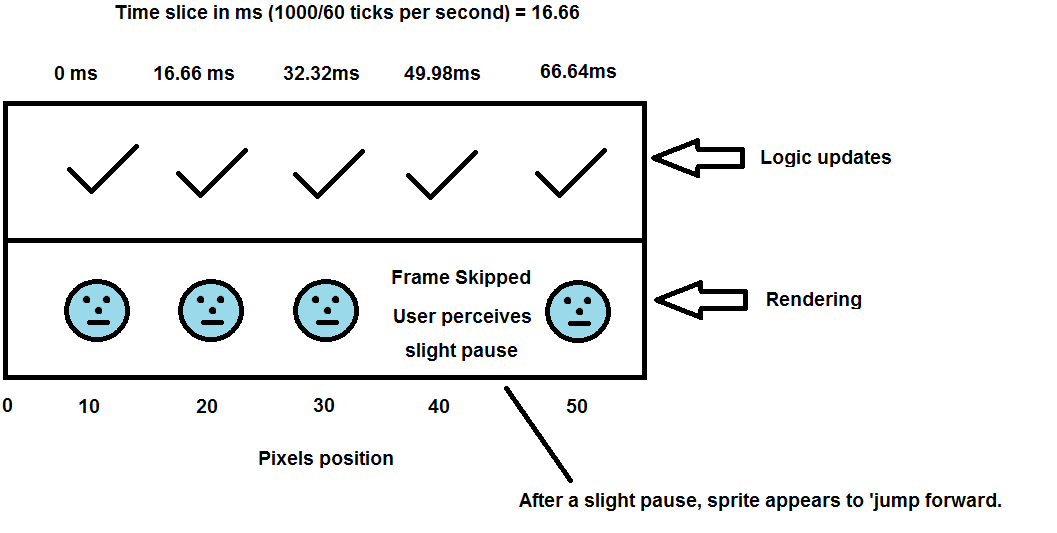 Therfore, my question is how does one deal with these 'pauses' and 'jumps' - I've read every article on game loops I can find (see below) and my loops are even based off of code from these articles. The articles specifically mention frame skipping but they don't make any reference to how to deal with visual glitches that result from it.

I've attempted various game-loops. My loop must have a mechanism in-place to allow rendering to be skipped to keep game-speed constant across multiple devices (or alternative, if one exists)

I've tried interpolation but this doesn't eliminate this specific problem (although it looks like it may mitigate the issue slightly as when it eventually draws the sprite it 'moves it back' between the old and current positions so the 'jump' isn't so big.

I've also tried a form of extrapolation which does seem to keep things smooth considerably, but I find it to be next to completely useless because it plays havoc with my collision detection (even when drawing with a 'display only' coordinate - see extrapolation-breaks-collision-detection)

I've tried a loop that uses Thread.sleep when drawing / updating completes with time left over, no frame skipping in this one, again fairly smooth, but runs differently on different devices so no good. And I've tried spawning my own, third thread for logic updates, but this, was extremely messy to deal with and the performance really wasn't good. (upon reading tons of forums, most people seem to agree a 2 thread loops ( so UI and GL threads) is safer / easier).

Now if I remove frame skipping, then all seems to run nice and smooth, with or without inter/extrapolation. However, this isn't an option because the game then runs at different speeds on different devices as it falls behind from not being able to render fast enough.

I'm running logic at 60 Ticks per second and rendering as fast as I can.

I've read, as far as I can see every article out there, I've tried the loops from My Secret Garden and Fix your timestep.

Plus various other articles on Game-loops. A lot of the others are derived from the above articles or just copied word for word.

These are all great, but they don't touch on the issues I'm experiencing. I really have tried everything I can think of over the course of a year to eliminate these glitches to no avail, so any and all help would be appreciated.

A couple of examples of my game loops (Code follows):

From My Secret Room

And from Fix your timestep

Instead of copy-pasting a game loop from some site, I suggest you think about how your game is made and what your priorities are, and then create a game loop based on that.

If you can split your game into these three elements, then you're pretty much on the other side.

It is now depending on what does each one of those elements look like, and what your priorities are, to make a game loop that works for you. But first, the bad news:

The only way to guarantee that your game will run at a desired framerate all the time, is to make sure that:

If you can't make these guarantees, then you will have to make compromises.

A common idea in modern games is that it is more acceptable for the display logic to fall behind, than for the update logic to fall behind. That means that, if for example a frame takes longer to display than usual, the game state should still be running in real time, even if some frames are dropped.

With this, you're drawing as fast as you can, and you're making sure that the game state is always up to date.

However, if showing all of the frames is more important than keeping the game state up to date (as in most older console games), then your game loop could look more like this:

Notice that we are fixing one update() call for each draw() call. With such a game loop, you will be showing all frames, while capping the frame rate. However, if one iteration of the loop takes more than draw_logic_step, then the game will slow down (but no frames will be dropped).

Those two game loops should suffice for the vast majority of games. Variations with interpolations, extrapolations, multiple threads and the like, are in my experience used only to optimize for corner cases where you want to push the update logic to the limit, yet keep the game running as smooth as possible.

Doing such optimizations though, is complex, and will make the game much more difficult to write and debug. In my opinion, you should start with a simple game loop as above, and you will see that it will work pretty well.

In fact, if your game is simple enough so both the update and display logics are really fast, then either of those two loops will work perfectly with no dropped frames or game slowdowns.

If your game is simple enough, and you are still dropping frames regardless of the game loop you use, then I would be inclined to think that the problem is not within the game loop but on your actual processing. What I would do is remove the fancy gameloop, use a simple one, and focus on understanding why are you skipping frames and fix that instead. Unfortunately, this changes the discussion from gameloops to how to debug and fix your code.

Some things that may help you are:

Some suggestions to consider:

I have a similar problem with jerky frames using android GL 2.0.

When traced on android studio GL profiler I saw that the glcompileshader function is called multiple times during game play. This is an expensive call but accounts for the jerkiness.

What causes these multiple calls to glcompilershader? I can only guess happens because the shader is invalid but I get no errors at creation. Not sure if accessing attributes in the shader causes a recompile of the shader. Still trying to debug this nightmare.

Not the answer you're looking for? Browse other questions tagged sprites movement game-loop interpolation movement-prediction .

6
Physics in my game confused after restructuring the Game loop
1
Getting sprites to move exactly the same on different devices
1
Interpolation using a sprite's previous frame and current frame
11
How does interpolation actually work to smooth out an object's movement?
1
Interpolating rotated objects
1
Capping framerate independently of logic updates in single-threaded Android Gameloop
4
Could someone help me understand this game loop logic?
3
Implementing "Fix Your Time Step"
1
Java - Why does my game loop stutter randomly?
14
Fixed timestep game loop, why interpolation