I have create a 2D game with directx11 and i want to use a depth buffer instead of a painter's algorithm to draw the sprites but i have a problem since i'm not really good with directx 3d programming. I can create a depthstencilview and it works but look at the following image: 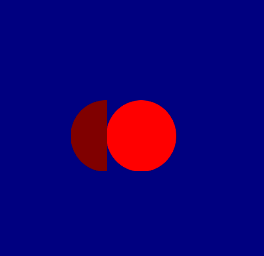 the darker circle is not a semi-circle, they use the same texture and the same mesh: a quad. First i render the light red circle( with 0.5 depth) and then the darker one(1.0f depth). the alpha pixels of the first subscribe the depth buffer so the second isn't displayed correctly. I need aplha pixels don't subscribe depth buffer I can i set depth stencil / alpha blend state to do this?

Sorry for the bad english

If you draw your upper circle first you are blending the quad with the background color not the other circle (because it was not drawn yet). For a 2D game you are most likely better off using painter's algorithm. Depth buffer is usually used with 3D geometry where we can't determine a correct sorting between polygons and this way one has to use some nasty tricks to display transparent geometry (which always result in either quality loss or impact the performance geatly). If you are convinced that you must use depth buffer refer to my answer in a previous question like this: QUESTION

Not the answer you're looking for? Browse other questions tagged c++ directx directx11 depth-buffer alpha-blending .

4
How can I simulate multiple depth channels?
0
How to print Depth to a Texture2D and then read it in the next pass on a shader in DirectX11
2
OpenGL ES draw pre-rendered background onto depth buffer
5
Modifying depth values in PixelShader (SharpDX)
8
Strange SSAO effect (wrong position/normal textures in view space?)
1
Does Direct3D 11 enable Z-clipping/discard by default?
0
Use an image as mask only where pixels are opaque
1
Apply multiple Shaders to one texture with DirectX
0
I can't render faces properly in my DirectX11 project