In 3ds Max, this is in the context of rendering cube map images from a Reflect/Refract map. In Unity, both cube map textures and skyboxes exhibit the same left/right "confusion". Oddly, however, the GUI labels for cube maps indicate that left is the -X direction and right is the +X direction - which is correct in Unity - while skyboxes indicate the opposite (all other axial labels are consistent between the two).

The upshot of this is that cube map images rendered by 3ds Max (which each have a suffix indicating their viewing direction) can be assigned to the texture slots in Unity with the same name and everything will work, but only because both programs label the left view as "right" and vice versa.

The only discussion of this I was able to find online was in a blog post on floored.com (search for "Unity Skybox Weirdness" and it should come up; I'd post a link but I lack sufficient reputation to include more than two). Here's an image from the post that illustrates the issue: 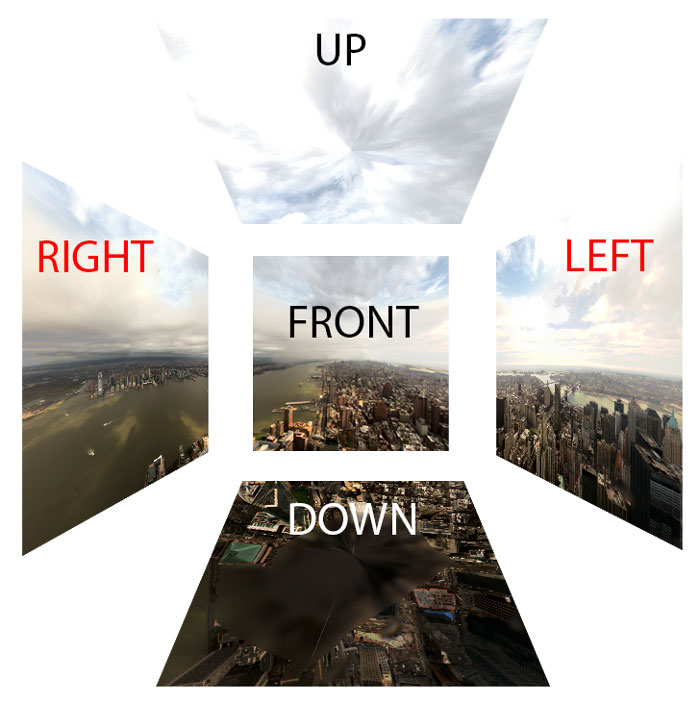 Is there a reason why the left/right axes of cube maps are mislabelled in both of these programs? Although it's trivial to ignore once you're aware of it, it seems like there should be a good (or at least historical) explanation for it, unless it's simply a case of a long-overlooked bug in 3ds Max that the Unity developers decided to accommodate.

Any thoughts would be appreciated!

This could be a confusion over whether one thinks of oneself as being inside or outside the cube for the purposes of labeling things. You're thinking of yourself as inside the cube, and you note that left/right are reversed. However, imagine yourself outside the cube; rotate it 180 degrees so that the "front" side is facing you; now the left/right sides are correctly labeled from your POV.

IMO, instead of using words like "front", "back", "left", "right" it's better to simply refer to cube faces as +X, -X, +Y, -Y, etc. This avoids the left/right ambiguity as well as the ambiguity of which axis is thought of as "front".

Not the answer you're looking for? Browse other questions tagged unity 3dsmax cubemap .

8
Left-Hand and Right-Hand Coordinate Systems
2
How do you rotate a cube map?
4
unity - problem in limiting rotation of object?
2
How to work properly with different coordinate-systems